The Battle-class destroyer HMS Cadiz comes to War Thunder as one of the main prizes in the upcoming new season of the Battle Pass!

The destroyer HMS Cadiz (D79) was laid down at the Scottish shipyard of the Fairfield Shipbuilding and Engineering Company in 1944, but was commissioned after the end of the war, in April 1946. The ship was assigned to the Home Fleet and participated in diplomatic cruises, exercises, and also in the Coronation Review (1953) to celebrate the coronation of Queen Elizabeth II. In 1956, the destroyer was sold to the Pakistan Navy. Before being sent to a new home port, the ship was modernised and refitted, and received a new name - PNS Khaibar. In 1971, during the Indo-Pakistani War, the destroyer Khaibar was sunk as a result of two hits by Soviet-made P-15 Termit anti-ship missiles launched by the Indian missile boat Nirghat. This was the first effective use of missiles of this class by the Indian navy. 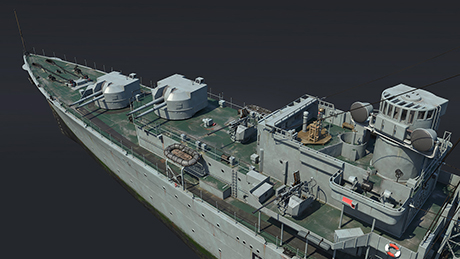 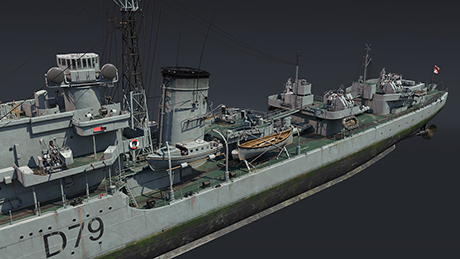 The premium destroyer HMS Cadiz will become the third Battle-class ship in the game, she will be available in the new season of the Battle Pass, which will start in War Thunder very soon. The British Battle-class destroyers are known as one of the best in the game due to the forward placed main guns, a solid air defence battery and 10 torpedoes in two five-tube launchers. Cadiz is a typical representative of her class! Both turrets of the main calibre guns are located in the forward part of the deck, which gives the ship an advantage in face-off attacks and breakthroughs to the front. The 114mm cannons offer a good balance between rate of fire and damage, the commander can choose from semi-armour-piercing and several types of high-explosive fragmentation shells. The most effective are probably the radio fuse rounds, which produce a larger number of fragments upon detonation and can be successfully used against aircraft.

Unlike Armada and Tobruk, which are considered to be very well protected from air attacks, the destroyer Cadiz has even more numerous short- and medium-range automatic anti-aircraft artillery: four twin Bofors guns assisted by 6 single mounts - a total of 14x40-mm guns! In battles in which Cadiz will participate, it would be wise to set the AI auto guns to fire on both air and surface targets, wrecking havoc to both boats and aircraft. The gun orchestra is complemented by two five-tube torpedo launchers, which are located in the middle of the deck.

The premium Cadiz destroyer is great for capturing points and energetic gameplay in the very centre of the location. The ship will be a perfect addition to any naval setup at medium and high ranks. The new British destroyer, along with other unique vehicles, will be one of the main prizes of the upcoming new season of the Battle Pass. Details to be announced soon!