The River-class frigates were developed in the early 1940s on the same premise as the preceding Flower-class corvettes; quick and cheap to build convoy escort vessels which would protect merchant shipping in the North Atlantic from the ever growing axis submarine threat. Unlike the Flower-class corvettes however, River-class frigates were larger, had a longer range and were overall more suitable for operations in the North Atlantic.

River-class frigates primarily served with the Royal Navy, but they also served with many other nations during WW2, such as Canada, Australia, the USA, France, Netherlands and South Africa. They remained popular even after the war, serving with Denmark, Norway, New Zealand, India, Portugal, Egypt, Argentina, Chile and many more nations! The last River-class frigates were decommissioned from military service during the 1970s. 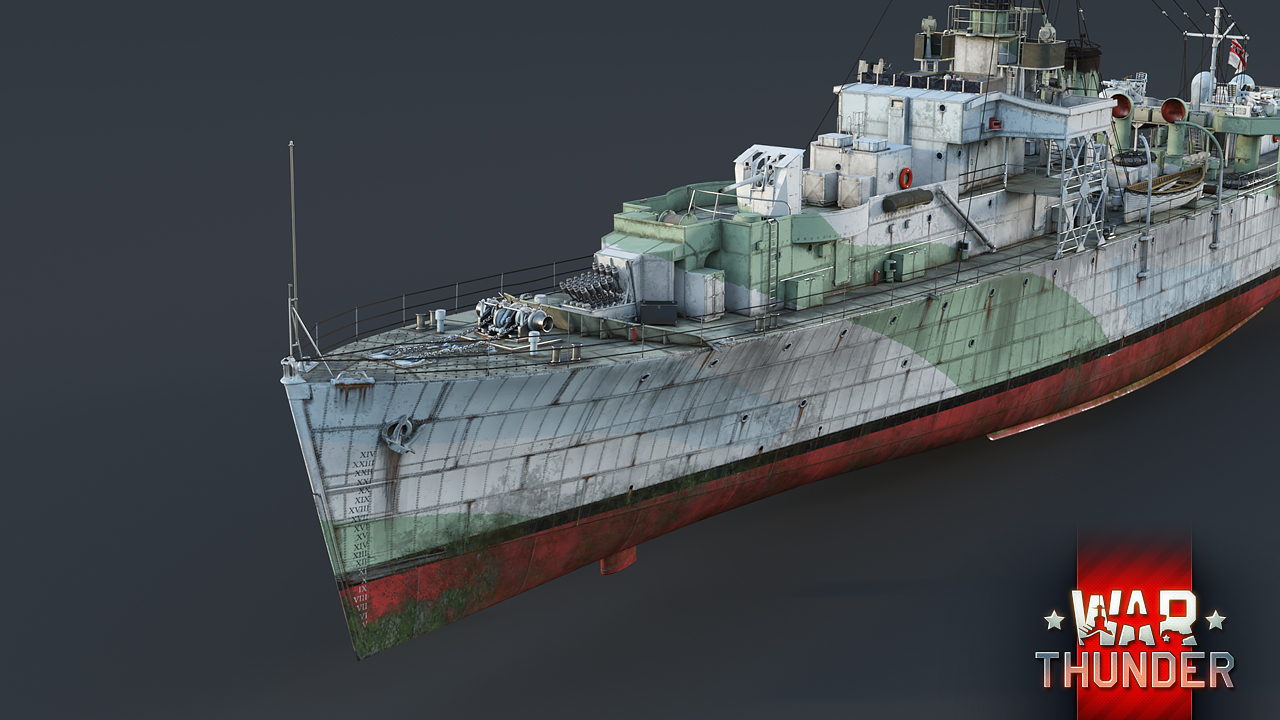 Unlike the Flower-class, River-class frigates feature a primary armament consisting of two 4-inch (102mm) cannons, located on the bow and stern areas of the vessel. These cannons will be especially useful in dealing with larger targets and at longer ranges.

Fun Fact: Even though only several dozen River-class frigates were initially planned, over 150 of them would eventually be produced thanks to their reliable and effective design as well as low construction cost.

However, despite the primary guns being quick-firing, they’re still unlikely to defeat a fast-moving, all-guns-blazing motor torpedo boat unexpectedly popping up from around an island. For critical situations such as these, the River-class frigate is also fitted with a number of 20mm Oerlikon cannons, which are excellent at responding to sudden threats like this as well as taking care of pesky pilots trying to sink your vessel. Should a sneaky attacker still manage to get too close for comfort however, captains will always have a number of depth charges available at their disposal to attempt a last-ditch effort in sinking their opponent.

Players can get the River class (K-246) by completing tasks in Operation H.E.A.T.

Commenting is no longer available for this news
Rules
Mr_Pokemon26295
4

Fungusar_DK, id say its more of a hard counter too the K2 Spawn point being changed too the small boats instead of with the destroyers like it used too be as the K2 is kinda nightmareish to deal with in that tier without something with a bit of bang but persistence and accuracy will counter size of course but lucky shots are lucky shots if u get fragged by ur magazine going boom!

Again I hope it is being considered that enemy AI submarines might become a target (or the basis of an entirely new game mode?) in the future. This way we can put to use those depth charges. Of course AI subs would not make attacks but would be worth victory points.

The ship looks cool but i have concerns, achieving the tasks is going to be very difficult for tier 3 and tier 4 players due to the abundance of AI, have gaijin got a plan for this?

Damage to AI [that replace players] count for Naval tasks.

Packal, thank god as getting to the higher Br ships takes forever

Will be the Hedgehog working?

I'll try to get this anyway, as I like convoy escorts for some reason. But can be get a River class and the others in the regular tree too (Loch class, Bay class etc)? Please?

There are 2 aircraft and 2 tanks also in this event. 2 of each type is entirely fair.

Smin1080p, Not if britain is the only nation getting ships two times in a row

blueangel550ge, and in most cases if you are a heli or top tier spaa player imo you dont need/deserve much more (just saying how for the most part top tier helis and spaa are busted p.p.s gaijoob plz buff bombers)

2 ships 2 planes 2 tanks, wtf are you complaining about

what's the problem with that?

Belove average speed... line... killls... me Let me guess british leaders decided it also was a good idea to keep boats in rowing speed so inf. troops can keep up?

It was base off of a whaler craft

I was hoping this would be a tech tree ship...

But you can still get it now, premium, spaded, free, and easily.

why couldn't have gijian just gave us The USS Asheville PF-1 https://en.wikipedia.org/wiki/USS_Asheville_(PF-1), she's the same thing as the River class frigate, but you know American.

Hopefully they will at some point as she was much more heavily armed than the British Rivers. Or better yet, maybe we'll get destroyer escorts.