The Bf 110C-6 is a twin-engine heavy attack aircraft developed according to a special programme whose objective was to outfit the Bf 110 fighters with a heavy cannon armament. This modification came into existence in the spring of 1939. The aircraft was designed to be equipped with a 30mm MK 101 cannon, while its standard-issue 20mm cannons were dismantled for the purposes of reducing the weight and increasing fuselage space. A series of issues concerning the manufacturing of the MK 101 cannons led to the postponement of the project, but in the summer of 1940, the German government placed an order to assemble a test batch consisting of 12 C-6 aircraft. All the fighters in this batch were deployed in the Battle of France as anti-tank aircraft, as well as in the Battle of Britain to combat enemy ships and destroy enemy radars. 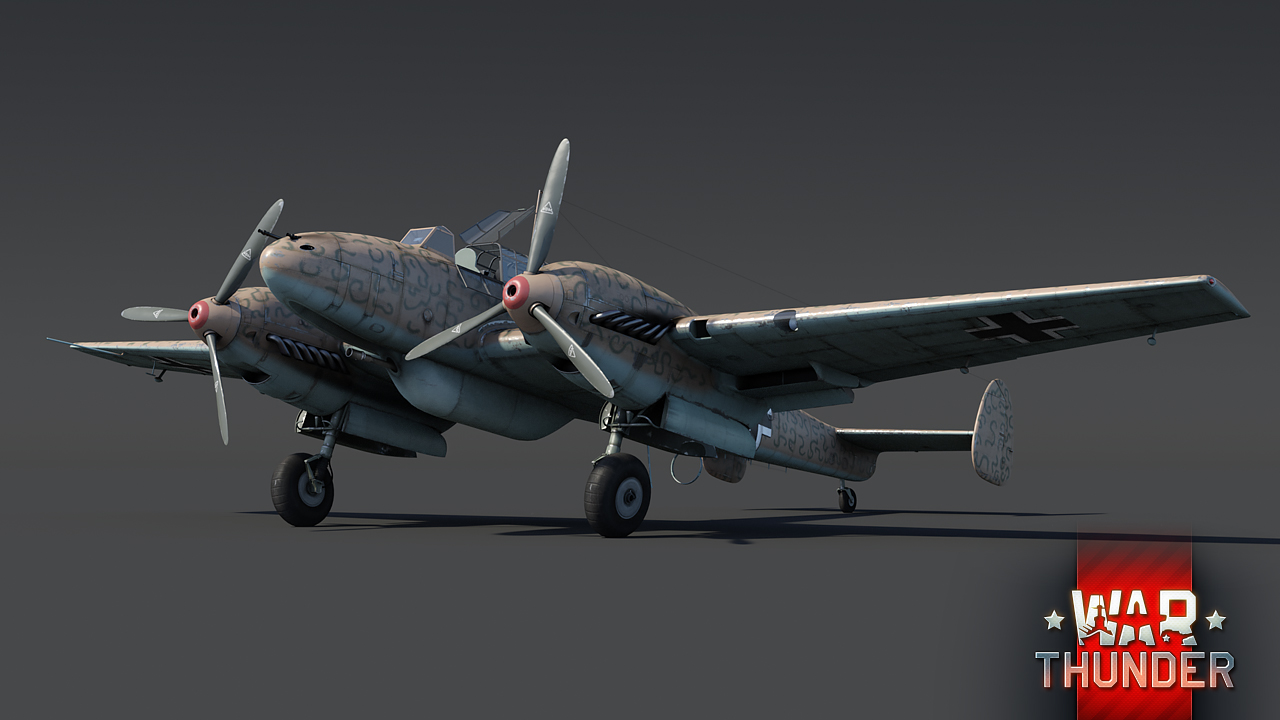 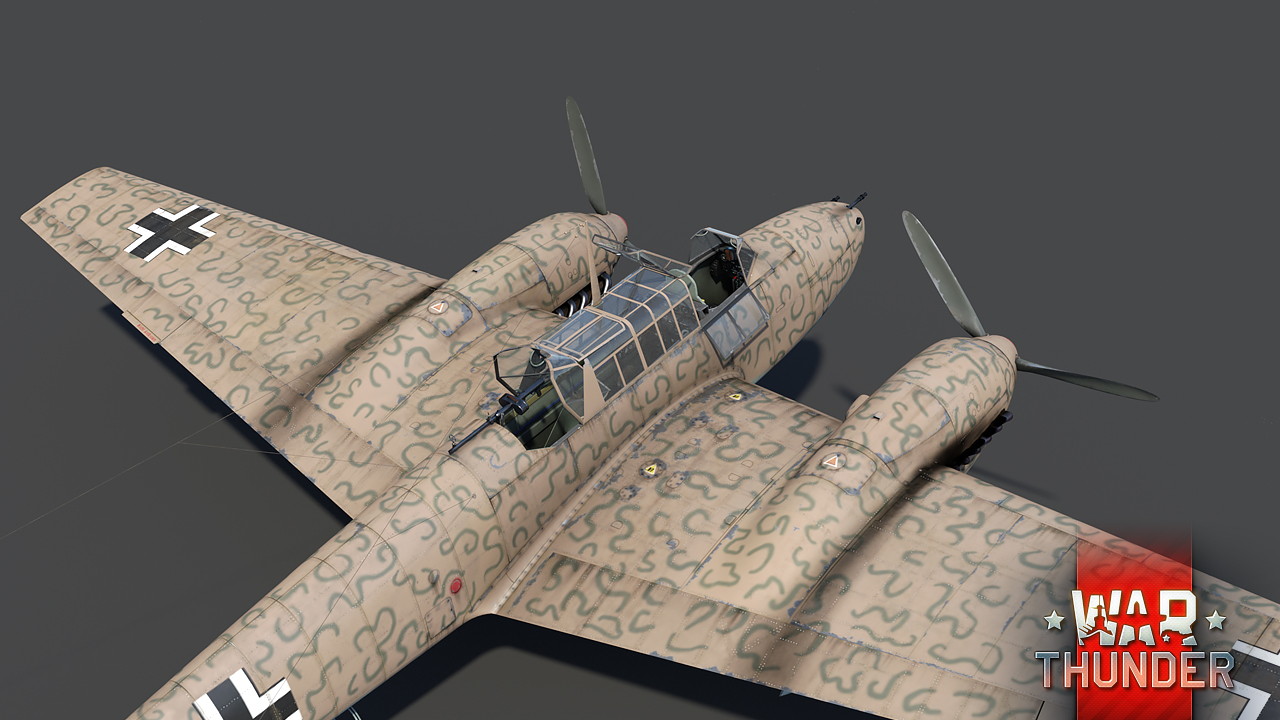 Our players will mainly appreciate the Bf 110 series for their versatile combat characteristics and high survivability. It’s no secret that this twin-engine series has all kinds of models, including bombers, attackers and pure fighter aircraft. The Bf 110C-6s, too, have their own niche on the battlefield – they are excellent at disposing of tanks and are greatly recommended for combined battles. The aircraft has a low BR, which allows players to team up nicely with series 3 and 4 Panzers, Pumas and early SPGs. Its 30mm cannon can fire armour-piercing shells and eliminate any target on the battlefield should it land a clean hit on the turret roof, the engine compartment or even one of the sides. The ammunition complement of the attack aircraft’s primary armament consists of 60 rounds. This may seem like not a lot at first glance, but it’s not exactly scant either, especially considering the destructive power of those 30mm rounds when fired at the tanks’ most vulnerable spots. The size of a cannon meant that the standard-issue 20mm MG FFs had to be dismantled – but at least the fighter got to keep its machine-gun battery located in its nose. Unlike the Hs 129 attackers, the Bf 110 doesn’t have any problems with its survivability. It can easily hightail it out of the battlefield with just one engine and a fuselage covered in gaping breaches. The aircraft’s speed, on the other hand, is rather slow, as you’d expect it to be. However, being fast isn’t all that important when it comes to taking out ground vehicles.

The Bf 110C-6 is one of the prizes in Operation H.E.A.T.  for pilots. It’s an extremely interesting aircraft to use in lower rank battles, and it’s very easy to get – it’s well worth it!

Commenting is no longer available for this news
Rules
ZeCorsair
18

This is a rather niche role 110 that comes specifically with the 30mm. Its a little too "odd" to have in the main tree, but makes a nice low level reward for pilots.

Smin1080p, Or maybe... just maybe... a legitimate mosquito variant with its correct flight model!! Or even fixing the Hornet!! Nah... its British.

Hey a new 110 is always nice and besides its complimenting the 110s already great ground attack abilities.

There is already a plane similar to this already in the tech tree.

Well, doesn't this thing looks like any other of the German twin engine...

And if its not to your taste, you can trade it on the market for the many, many people who do want this aircraft variant and have been suggesting it for years :)

Smin1080p, I'm pretty sure anyone that actually wants this thing will just grind it, Can't imagine that anyone is going to struggle grinding a rank II reward plane tbh.

How about giving it to the Italian Tech Tree ?

Nahh the others are pretty good we had c-4 in game already, there just re-adding it sadly it was pretty good its probably gona be 2.0 or 2.3 again

KingLeonidasI, ugh, thats the br that is already saturated with german ground pounders, we need ones at 5.7- 8.7 that arent premium, every good ground attacker germany has after 4.7 is a premium.

beyond lame every other nation got something cool and germany recieves a crappy bf110 which already exists.

You wont be calling it crappy in a week or so when people are popping your tanks from above with the MGs like its nothing.

Beautiful. Can't wait to try it out in ground RB.

Of all the event vehicles in the game, I'm least hyped about this. There are already 3 BF110 models in the game. I'm not going to waste my time on it.

THANK YOU GAIJIN! I was afraid it was gonna be another "build a slog" but instead you give us a classic Good Old Summer with 2 truly unique birds! Oh happy day oh happy daaay!

because nothing says 'unique' like a 110 with a gunpod.... oh wait, theres already one in the main tree...

Whats its BR? germany needs more groundpounders at certain brs but if this is a similar br to the other 110s its gonna be redundant. I still want it though. mk103s are my baby.

theres already a better bf 110 in the main tree...