IS-7, an old school heavy tank

The experimental IS-7 was the pinnacle of development in Soviet heavy tank design, and it was significantly ahead of its competitors. Old-school heavy tank, it was the heaviest, most powerful, and well armored Soviet tank in the first half of the 20th century!

In short: a new Soviet rank V heavy tank in the USSR tech tree. Incredibly fast and extremely well armored even against modern shell types, the IS-7 also packs a good punch with its 130mm cannon. 68 tons of pure tank ecstasy await all participants of our summer marathon!

The development of this advanced Soviet heavy tank began in early 1945. Several outstanding scientific groups got involved with the work at once, and the new vehicle was supposed to combine all the latest developments and a great deal of military experience in the design of heavy tanks. After creating several prototypes and experimenting with the engine, armament, and suspension, a steel giant was born and christened Object 260, with the letter designation IS-7. Weighing 68 tons, the heavy tank was equipped with a naval diesel engine that took the monster up to a fantastic 60 km/h. The tank was armed with a powerful 130 mm rifled cannon with mechanized first-order ammo racks and an amazing eight machine guns: two high-calibre 14.5 mm KPVs (one twinned with the cannon and the other an anti-air gun) and six 7.62 mm RP-46 machine guns The armor of the IS-7 is its main feature with high protection value, along with a range of advanced technological solutions, some of which were successfully used on more modern tanks.

Unfortunately, the tank turned out to be very expensive for a country that was recovering after World War II. Mass production would involve a range of technological problems. In addition, transporting the giant IS-7 was very complex, it required special railroad platforms and the tank’s weight exceeded the maximum load for the majority of Soviet bridges of that time. After the construction of several prototypes and a limited experimental series, the project was closed. But this charismatic heavy tank’s path in War Thunder is only just beginning! 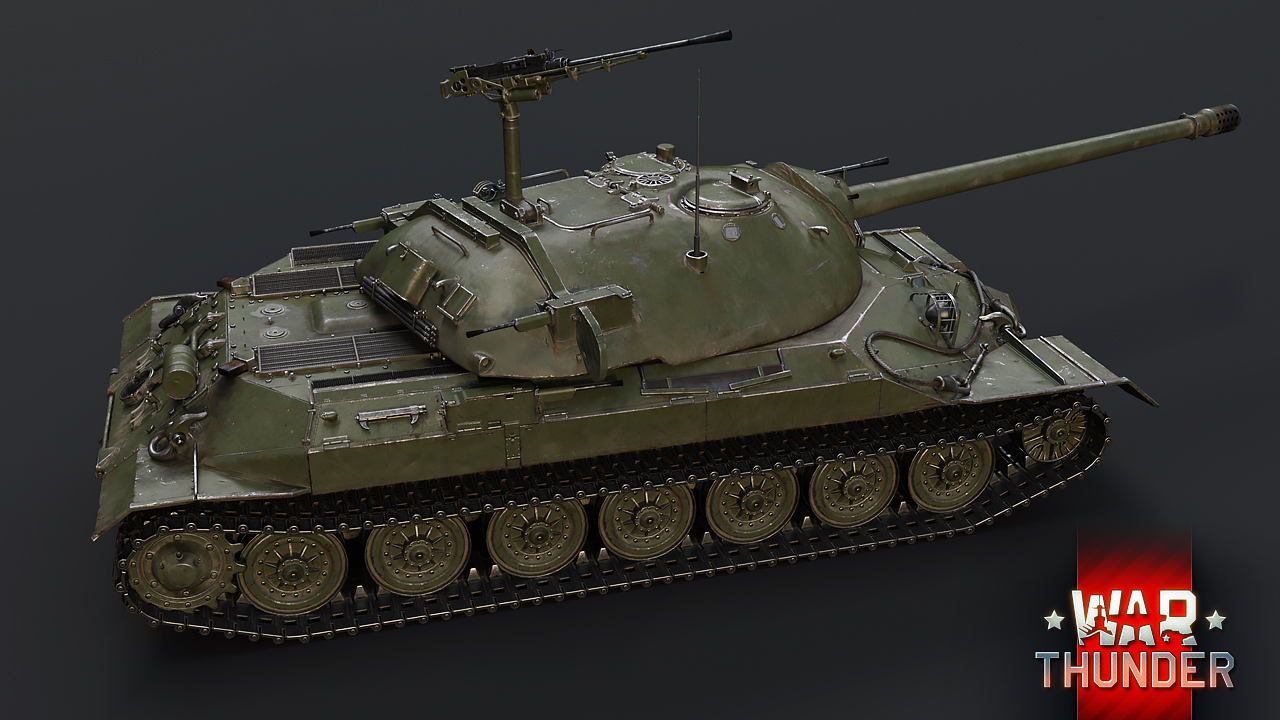 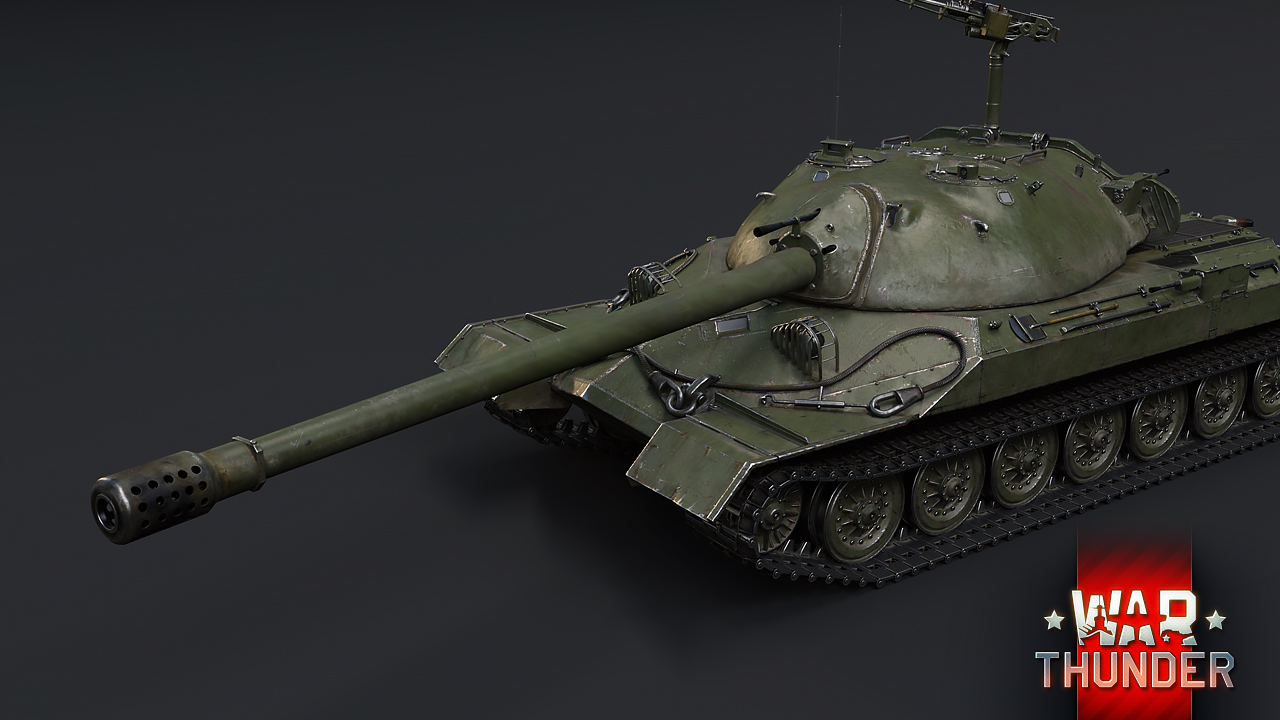 In our game, the IS-7 will be added at rank V in the USSR armor tech tree as a main prize for completing the conditions of the summer marathon, Operation S.U.M.M.E.R. The IS-7’s defense is one of the best among tanks with steel armor – the hull’s armor plates and parts are welded so that enemy shells hit at a high angle. The tank’s turret is cast, with a variable armor thickness and a special rounded shape that guarantees frequent ricochets from traditional armor-piercing shells. The tank’s frontal projection is protected better than the legendary Maus – the hull’s pike nose is welded from 150 mm plates at an angle of 58 and 50 degrees, and the turret’s effective armor thickness varies from 260 mm to 500+ mm. As a result, the tank is well protected against frontal hits from all armor-piercing shells calibres in the game, and even has good defense against more modern armour piercing and HEAT shells (up to 90 mm).

Fun fact: in tests of the IS-7, it was shot with several guns, including the German 128mm cannon from the Jagdtiger and its own 130mm S-70 cannon. No shell was able to pierce the tank’s armor with a frontal hit, even at close range.

The tank is armed with the 130mm S-70 cannon with its characteristic lattice-like muzzle brake. The gun has two types of shells: armor-piercing, with roughly 250 mm penetration at 500 m, and HE shells. The weapon’s strong suit is its good penetration with armor-piercing shells, high accuracy and range. The primary mechanized loading system and two loaders can reach a rate of fire of 6 shots per minute. Its weak points are its low ammunition complement (30 shots), lack of more effective shell types and the miserly vertical aiming angle traditional for Soviet guns. As a pleasant bonus to the gun, there are two high-calibre 14.5 mm machine guns that can be a thorn in the side of a lightly armored enemy while the crew reloads the main gun.

In spite of its huge weight at 68 tons, its powerful naval diesel engine can drive the tank to 60 km/h on the street, which is a fantastic speed for heavy tanks of the mid-20th century! In certain situations, thanks to good movement values and a decent gun reloading speed, gameplay on the IS-7 is similar to medium tanks, and even a perfectly coordinated team will be terrified to see one in their flank, let alone a random.

Overall, the IS-7 is worth fighting for. It’s a powerful, balanced and sensible heavy tank to play that brings the spirit of the old school to the battlefield of more modern tanks. Never show your back to the enemy, aim carefully and your IS-7 will always be among the best on the leaderboard! See you in battle!

Commenting is no longer available for this news
Rules
Desolator7
0

This tank looks amazing. Too bad I actually have a life outside of war thunder. Also the fact that this event started right when I left on a vacation doesn't help :/

Will we be able to get the IS-7 at a later date? I'm a pretty hardcore player with multiple trees level to Tier 5 and 6, but an injury to my hands and wrists has made it so I cannot participate in the event right now.

will this tank come with a stabilizer? If it doesn't you guys might want to reconsider that. http://www.tanks-encyclopedia.com/coldwar/USSR/is-7-object-260

This summer event this year is just so pitifully lacking in terms of rewards compared to previous events. There's only 2 measly decorations this time around when in 2017 there were 12 high quality ones and 1 new vehicle instead of 4. Furthermore, the effort and time required to obtain these few rewards, even the trivial ones, have been adjusted for "HARDCORE DIFFICULTY" for the IS-7 which has completely stolen this event. Why ruin this casual event when other "hardcore" options(tourneys) exist?

I think I'll just use this tank to hide behind something and shoot at everything with my MG, since heavy tanks don't really do much against HEAT.