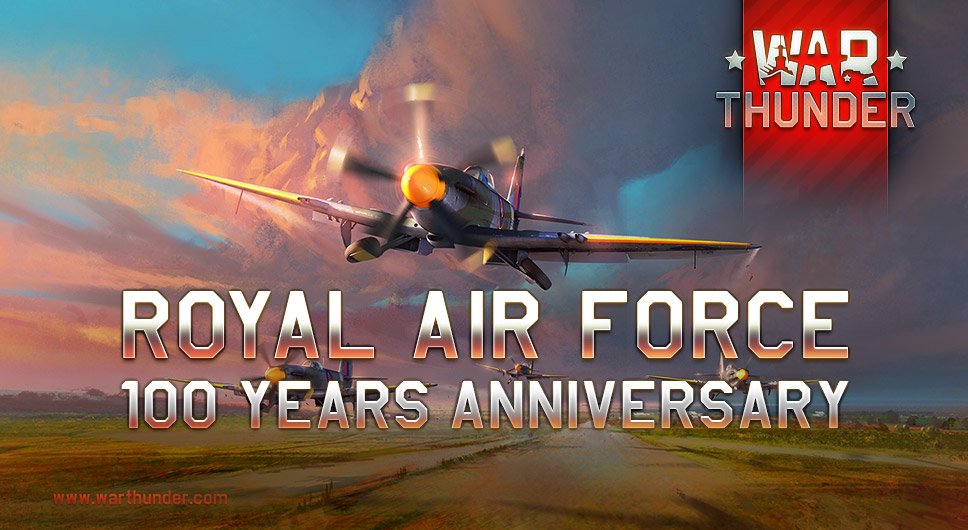 On the 1st of April 2018, the Royal Air Force will reach a huge milestone in aviation history. The RAF will celebrate its centenary year as legendary aircraft from the first world war era Sopwith Camel, to the Iconic Supermarine Spitfire, through the dazzling Hawker Hunter all the way up to the awesome power of the current Eurofighter Typhoon mark 100 years of continuous all year round operation of one of the most famous air forces in the world.

The RAF saw its creation in the dark days of World War I, when on April 1st 1918, the Royal Flying Corps (RFC) and Royal Navy Air Service (RNAS) were amalgamated into the Royal Air Force, forming the basis of what we all know today. Of course later, the Fleet Air Arm would eventually be formed separate out from the RAF, taking naval aviation under the control of the Royal Navy for carrier and maritime operations.

In the skies of War Thunder, the British have been present in battle since the very beginning. Ranging from the vulnerable Fury and Gladiators of the first rank, through the Iconic Hurricanes and reliable Wellingtons of the second rank, to the more powerful Typhoons and Iconic Spitfires of the third rank and into the mighty Lancasters, Tempests and Mosquitoes of the fourth rank. Originally, the Gloster Meteors saw Britain into the top ranks, but since then, they have been bolstered by additional support from the Canberra bombers and the Hawker Hunter, a true top star of the British tree. We have also seen the arrival of the Griffon Spitfires into rank IV as well as many other British classics across the ranks, such as the Sunderland, Halifax, Stirling, Venom, Hampden and the Lincoln.

Just as her majesty’s RAF continues to defend the skies above Great Britain in the 21st century and beyond, so too will they act as the majestic knights of the sky in War Thunder!

We invite you to participate as a pilot of the Royal Air Force in the "Royal Tournament" where the format will be “everyone for themselves” using Spitfire fighter aircraft in all game modes.

Win and get the “RAF Centenary” decal (author: Colin 'Fenris' Muir) and the main prize - a coupon for the premium Spitfire F. Mk IXc (rank III).

The pilot who scores the first 5 shoot downs of the enemy will win. You can setup your own Spitfires in advance or use the presets of unmodified Spitfires with  novice crews available to players for participation.

Bundle with 30% discount and vehicles for golden eagles

Especially for the Royal Air Force anniversary this week, the Plagis' Spitfire LF. Mk IXc and the Typhoon Mk.Ib (previously only available in packs in the Gaijin Store) will be available for Golden Eagles.

Please note! You can also receive the unique title if, between the 6th and 9th of April you login to the game, win at least one battle, whilst having previously acquired all the individual packs with the vehicles included in the event pack (you have to have purchased all 3 packs from the bundle “His Majesty's Finest”). The title will be given to players who have fulfilled these conditions after April 9th.

PS4 players will be able to receive the “His Majesty's Finest” title by simultaneously purchasing the “Plagis' Spitfire LF. Mk IXc” and the “Typhoon Mk.Ib” packs for Golden Eagles (you need to purchase both of them). Alternatively, players can already have both of these vehicles, or purchase the missing one during the event. In this case, you will just need to re-login to the game to see the title.

Happy Birthday to the RAF!

Now you need 5 kills instead of 6 to get the victory.

Fixed a problem in which the only player left in the sky lost the fight, if it was not on the first line of the list.

Stona_WT, Is it possible to play with no British planes researched? No contradicting answers please :)

I agree.. cost 50K SL to participate in each mode, only can play 60 times to attempt for victory... and victory requires 6 shoot downs when only 5x4 respawns in the game... meaning you have to kill more than 1/4 of the server in free for all in order to get a coupon?? wtf????

Because having it be 1v1 would actually make it not a terrible event that just sucks money.

Was looking forward to playing War Thunder today, after losing 100k SL with nothing to show for it and having had absolutely no fun, I decided enough War Thunder for today.

I like it, helps to keep the riffraff out.

DerLachendeMann, Yeah, I enjoy spawning in, going head on with a person, using all my ammunition, not hit them once, and getting shot down, then rinse and repeat.

Yeah this event is complete crap why didn't they make it like the USAF anniversary where you win so many battles with 60% battle activity. That was a better way to do it.

Not particularly enjoyable. Concept is good, but its implementation is wonky. Too many sparks and contestants are not on fair footing as those with aced crews and upgraded vehicles have an inherent advantage.

I mean, that and no matchmaking whatsoever, so unless you are already an amazing spitfire pilot, you could easily burn through 60 matches without 12/9 wins, while getting farmed by veteran pilots.