77 ft Elco PT-20 Class torpedo boat: Powerful Reserve
24 October 2016 Development
Attention! This news was published on the old version of the website. There may be some problems with news display in specific browser versions.

Our focus today is the American 77 ft Elco PT-20 Class starter torpedo boat,
which is capable of performing very well even outside the ‘sandbox’.

We’ve already acquainted our players with boats from the American Electric Launch Company (shortened to Elco) with Kennedy’s famous PT-109. War Thunder’s American naval tech tree will have quite a few vehicles developed by this company, including the reserve 77 ft Elco PT-20 torpedo boat. This boat will be at rank I in the US naval tree and will be one of the first boats that War Thunder players will become familiar with in battle.

In the summer of 1940, American naval command demanded the replacement of low-power and outdated 18 inch (457 mm) torpedoes with the new, 21 inch (533 mm) caliber torpedoes. Increasing the caliber meant increasing the torpedoes’ length. However, the torpedo boats produced at that time were only 70 feet long – not long enough to house the larger torpedo tubes. In order to begin production and deployment of the new torpedo carriers as soon as possible, Elco’s engineers suggested alterations to the design of a torpedo boat project from a previous state order, increasing its length by 7 feet. The first boat for which such changes were made was the PT-20, which became the pioneer of a new series of torpedo boats. 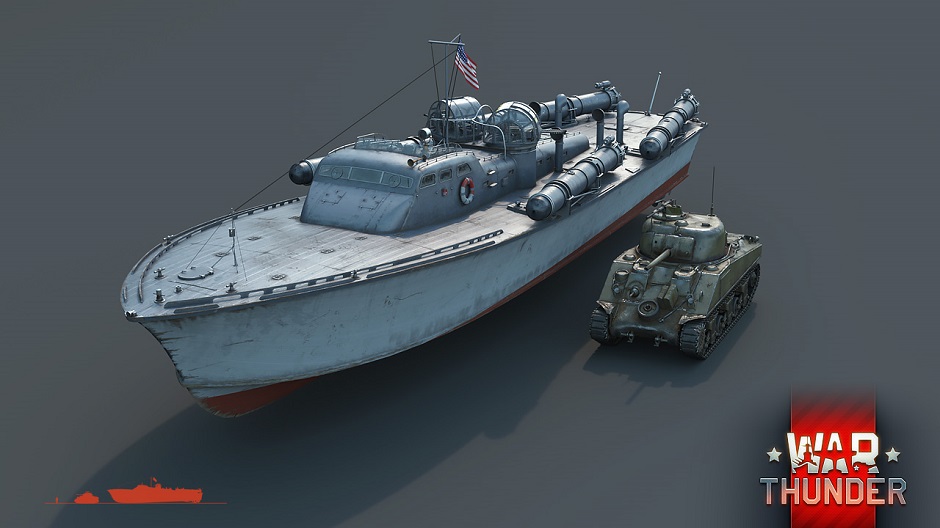 Now let’s take a look at the boat in the game. The PT-20 is a medium-size boat (23.5 meters long) with a medium speed – at full speed, the boat can reach 41 knots (around 75 km/h). As for her armament – it’s great for rank I! The boat has two twinned high-caliber Browning machine guns in fairings along the sides.

Although the turrets can’t rotate 360 degrees (their arc of fire is limited), they’re excellent at dealing with contemporary boats and small airplanes that try to launch an assault on the PT-20. The boat is equipped with four torpedo bays with respectable 533 mm torpedoes – players will often see the very same torpedoes on higher rank boats. The boat’s commander only has to aim well – these torpedoes will do the rest of the work in destroying any target above water.

The 77 ft Elco PT-20 Class torpedo boat is an excellent introductory vessel for small fleet warfare in War Thunder. This beautiful and dangerous boat will arrive in the first battles of the War Thunder naval closed beta test. Join in!

Commenting is no longer available for this news
Rules
Results45
0

Can we have the recoiless-gun launched Davy Crockett sub-atomic bomb? It could be mounted on a 1950s APC or jeep (practically on PT-boats) and had a TNT yield of 240 tons, or over 38 times the warhead of the Grand Slam Bomb.

For reference: the same W-54 warhead was used on AIM-26 missile.

If they made it always foggy, with about 50 metres of visibility, but radar blips of enemy boats to a much greater range... then this MG melee *might* be fun. Dropping a torpedo and hitting another pbr in a fight like this is only fooling the gullible, unless they plan on making it easy to KO the pilot, and then coup de grâce the boat while it's dead in the water with a torp.

I know the time has already past for a sale but I've got only 25 dollars will there be another sale on boats and beta access? will any additional boats become available to purchase I don't use the Russians much but they have the cheapest and most powerful ship. if I could get a boat for the Germans Americans or brits for $35 or less that would be great. Though I personally would prefer the Germans or Americans

Will you Athe germans and japanese boat? they have a lot of them, and will you add 3 area (land, sea, air) in one single battle?