M26 Pershing: A Medium Heavy Tank
17 March 2016 Profile
Attention! This news was published on the old version of the website. There may be some problems with news display in specific browser versions. 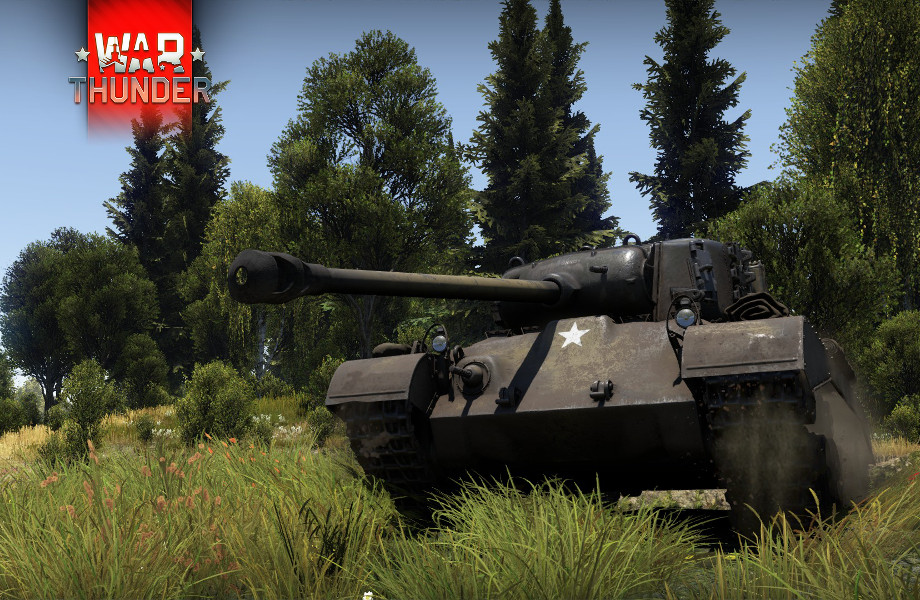 In War Thunder, some newer players can be a little confused by the Pershing’s designation, as it is classified as a medium tank while during the final stages of Second World War it was designated as a heavy tank. It was developed as a heavy tank, the first vehicle of such class actually fielded by the US Army, the very first American heavy tank was the M6, but this vehicle proved to be a failure and was never used operationally; besides, the US Army did not see any use for a heavy tank in 1942. Post-war however, it was redesignated as a medium tank and because of this, the Pershing is located in the medium tank branch of the American tank tech tree; more precisely, it sits on rank IV with a BR value of 6.3.

Coming from the T25, its direct historical predecessor, the Pershing features the same 90 mm M3 gun but has stronger armour, while the T25 had frontal armour 3’’ thick (76.2 mm), the Pershing received 4’’ (101.6 mm) frontal plate sloped at an angle of 43°. In the game, this armour gives you effective line-of-sight thickness of roughly 160 mm when unangled. Such protection is enough to protect you against the infamous 88 mm KwK 36 L/56 gun on the Tiger tank at medium to long ranges, while for example the T-34-85 with its 85 mm gun has to engage you at close range to be able to defeat your frontal glacis, both mentioned adversaries are regular opponents of the Pershing. The turret boasts even better armour, as the mantlet is 114.3 mm thick and oblique. Moreover, the mantlet is big enough to overlap with the 101.6 mm thick turret front, giving you the combined thickness of nearly 216 mm of armour with the exception of a small area around the gun. With a bit of luck, the turret  can thus sometimes frontally deflect shots even from the dreaded 88 mm KwK 43 L/71 gun found on the Tiger II or the massive 122 mm D-25T gun on the IS-2. In the Pershing, you will often meet both of these tanks as well.

As already mentioned, the Pershing was originally designated as a heavy tank. This was mainly due to its armament. In real life, the M3 gun proved itself to be a very effective weapon, as the Pershing could engage not only most common German vehicles such as the PzKpfw IV or the StuG III, but also Tiger heavy tanks and Panther medium tanks. With the standard ammunition, the 90 mm gun was able to destroy both of these famous tanks frontally even at range. With the M304 HVAP round, the gun then had enough punch to defeat the frontal turret armour of the Königstiger tank. All these characteristics apply in War Thunder as well. You can easily dispatch a good portion of enemy vehicles at the given BR range with either the T33 or the M82 rounds. The M304 HVAP round, sporting up to 264 mm of penetration, will then allow you to penetrate the armour of even the most armoured opponents you can meet, as long as you know where to aim.

The Pershing arrived too late and in too little amounts to see any significant action during the Second World War, when the combat record of the M26 was limited only to handful of tank to tank skirmishes. Probably the most famous is the tank duel at the front of Cologne Cathedral. A  single Pershing from the 3rd Armored Division was sent to dispatch a single Panther tank holding position in front of the cathedral. The American tank managed to knock out the Panther with three penetrating hits. The Pershing then saw more extensive action during the Korean War, where the tank proved to be highly effective against North Korean T-34-85 medium tanks, being able to destroy these tanks at long range. It was however in the mountainous Korean terrain where the biggest disadvantage of the Pershing came to light. As the Pershing used the same engine as the M4A3 Sherman while being nearly 13 tonnes heavier, it was noticeably underpowered. You will notice this disadvantage in the game as well — the Pershing has rather slow acceleration and you can expect a bit of trouble when driving up slope.

That said, the Pershing’s playstyle has more in common with heavy tanks than with a medium tank. Your strategy should be based on opponents you face. When faced with lower tier vehicles such as the T-34-85, you can afford to take a shot or two, as long as you’re not too close. Soak up a hit and then dispatch your opponent with a well-placed shot. However, when higher tier adversaries appear, such as the Tiger II (H), the IS-3 or the T-54, it’s better to let equally tiered heavy hitters  take point and stay in the second line, watching for flankers and taking shots at distracted enemies. The ammunition choice is also crucial — the default AP round has better penetration, but much lower post-penetration effect and poor performance against sloped armour, so it’s better to aim for flat areas and critical modules such as the gunner or the gun breech. The M82 round will give you more freedom when choosing the place on enemy tank to strike due to its explosive filler and has better performance against sloped armour, but has slightly worse penetration. Use it when hitting exposed flanks of enemy tanks or when shooting at sloped frontal armour you can penetrate. The HVAP round is then best for penetrating the strongest of armour, such as the turret front of the Tiger II (H) — the post-penetration effect is however low, so the same advice as for AP round applies.

During the course of the Korean War, the M26 was then replaced by the M46 Patton tank, which had much more powerful engine, improving mobility significantly. The M46, with its great mobility and HEAT rounds. will be your next stop in War Thunder as well, if you wish to continue the American medium tank branch. In the real life, the M26 proved a favourable  service in Korea, although tank engagements were rather rare in this conflict. Its main legacy is that it started the successful line of American medium and main battle tanks, culminating in the form of the M60 Patton main battle tank.