Dmitry Fyodorovich Lavrinenko
18 August 2015 Warrior Profile
Attention! This news was published on the old version of the website. There may be some problems with news display in specific browser versions.

Dmitry Fyodorovich Lavrinenko (Russian: Дмитрий Фёдорович Лавриненко) was born in September, 1914. He was given the ‘Hero of the Soviet Union’ award, and was credited with a total of 52 confirmed kills. He volunteered for the army and finished his training at Ulyanovsk Tank Academy in May 1938. He saw extensive combat in Poland, 1939, and in Bessarabia,1940.

During 1941, he was the commander of a T-34/76 tank. At this time, he became famous for being the last tank to retreat from a battle, and for employing risky tactics while fighting. On the 6th of October, in a battle near Mtsensk (Russia), Lavrinenko, along with 3 other T-34s, engaged 34 German tanks. Not only did they destroy 15 of those 34 tanks, but all 4 attackers were able to successfully retreat. Out of the 15, Lavrinenko destroyed 4 of them, paving the way for his title as an ace.

During the defence of Moscow, Lavrinenko was able to earn the bulk of his achievements. On the 7th of November, Lavrinenko was leading a squad of 3 T-34s and 3 BT-7s, when he engaged a group of 7 German tanks near the village of Lystsevo. The resulting outcome proved to be a flawless victory for the Russians, as they were able to destroy all of the opposing tanks with no allied losses. However soon after this, Lavrinenko spotted a column of 18 German tanks which had managed to break through the Soviet defences. After signalling his allies to fall back, he positioned his tank into a strategically defensible position, completely concealing his vehicle amongst the snow and trees. From here, and near point-blank range, he managed to destroy 6 tanks without revealing his position, resulting in the column’s scattering and ultimate retreat.

Lavrinenko was able to repeat these feats in similar fashion throughout his next two engagements, during the defence of Gusenevo and Volokolamsk. In the latter, on the 18th of December, he scored his 52nd, and final kill. He was killed quite anticlimactically by a mortar shell, after he exited his tank and ran to report to his commander of his victory.

Lavrinenko holds a record for the most kills made by an Allied ace during the war, 37 of his 52 being made in only a 6-week time period. He was posthumously awarded the title of ‘Hero of the Soviet Union’ in 1990.

In one of the following Updates, we will include decal Dmitry Donskoy 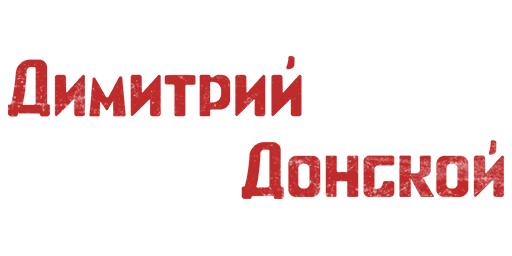