TBF-1c / Avenger Mk 1
9 June 2015 Vehicle Profile
Attention! This news was published on the old version of the website. There may be some problems with news display in specific browser versions.

A TBF-1C of the VC-8. Camouflage with custom damage textures created by Hueynam1234 | Download here!

The TBF-1C in War Thunder

It may be a portly single engine torpedo bomber, but do not underestimate its combat potential and its 2.7 BR rating is just right. It is an excellent warplane where it can wreck havoc on the ground and participate with fellow fighters. While not much, the rear .50 caliber (12.7mm) upper turret has excellent coverage and .30 caliber lower (7.62mm) protects the lower rear.

The in game American TBF-1C and its UK FAA counterpart Avenger Mk. 1 (TBF-1B per Grumman designation) has two wing mounted .50 (12.7mm) machine guns which replaced the single .03 (7.62mm) nose gun in prior versions. This is an excellent choice as later variants were mainly involved with radio and radar improvements until the much later (mid 1944) -3 version introducing wing hardpoints for rockets and more bombs. The only difference is the UK version is some 40 km/h slower.

In the game it is a solid ship and although only carry 4 bombs they are 500 pounders (225 KG) thus good on the majority of targets, not to mention the single “fish” (torpedo) if you want to hunt carriers. Complimenting the bombs are a pair of .50 “M2’s” for strafing goodness or other aircraft should you choose. The Avengers 2.7 BR puts it in bracket of weaker aircraft and fortunately for you the Avenger is robust and can take licks and the 2 rear gunners will dish out some hurt so fly it to the gunners advantage. A dogfighter by no means it is not a sitting duck, well, a “turkey”, either. A gaggle of them could easily take down a better fighter. Don’t forget its amazing slow speed ability, being a carrier aircraft it has a very low stall speed allowing tight turns (middling roll) to force enemy aircraft to easily miss and overshoot.

When faced with a TBF avoid giving the top gunner an easy target, like any bomber. Slashing attacks are best, or in a pinch come in below an face only the less effective bottom gunner. Diving attacks work great too aiming at the pilot, but be cautious of a slow mover close to ground or you become a lawn dart.

In the late 1930’s the US Navy need a replacement for its rapidly obsolescent Torpedo Bomber “Devastator” (TBD). Leroy Grumman proposed design was accepted from several entries, but it was a big, heavy aircraft for the time. Designated the TBF (as F is after D) it was ordered in April 1940 with first flight was 7 August 1941 (the TBM is a TBF produced by General *M*otors automobile company, thus “M”). Right off the bat it was a remarkably balanced machine, stable flight, spacious interior, and advanced technologies in Grumman's other aircraft. Its clever unique rear folding wing was applied to Grumman’s older F4F fighter which until the -4 variant were fixed and the later F6F Hellcat was designed with the same mechanism from the start.

Its real legacy was what it could do and did. It was built large to carry bulky equipment, but in doing so it had space to carry larger special equipment built later other carrier aircraft could not carry, leading the way in developing new radio, radar, weapons, and an early Anti-Submarine Warfare (ASW) devices. It also found itself in service with many armed forces with UK’s Royal Navy being an early user (their name “Tarpon” was soon abandoned to USN’s “Avenger”).

Among its long list of accomplishments is sinking the transport sub I-52 and light carrier Ryūjō and Hiyō, final attack on battleship Hiei and participated in the Musashi and Yamato attacks. Future US President George H. W. Bush was the youngest ever pilot of one and award winning actor Paul Newman was a top gunner in anther! Post war it continued in military use in many nations in a variety of rolls but also found many civilian missions with New Zealand using them to pioneer crop dusting techniques while in Canada many became fire bombers and a reason so many are airworthy today. Its most unusual wartime credit must be shooting down a passing German V-1 flying bomb! Its most famous incident was the mysterious disappearance of “Flight 19”’s 5 avenger in the “Bermuda Triangle”.

This one is a beautiful turkey!

In one of the following Updates, we will include the Emblem "Plonky",
No. 30 Squadron of the Royal New Zealand Air Force: 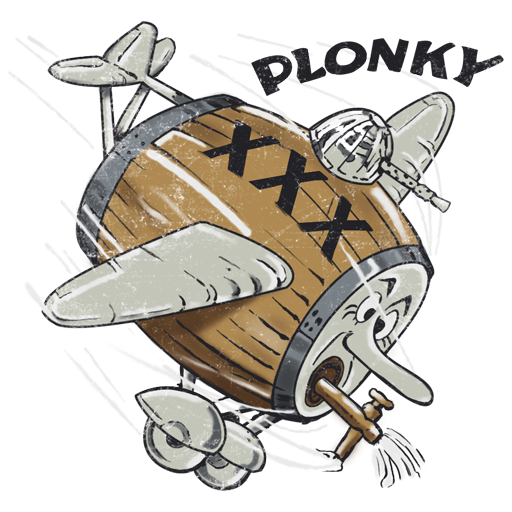 How many enemy ships did you manage to sink with the TBF?
Or maybe you have the British premium version - Avenger Mk.1?
Leave a post with your experiences in the comments!