In the early stages of World War II, the strength of the U.S. mechanised forces was fairly limited. Most of the available tanks were fast, but not well armed or armoured. After the Fall of France in 1940, the U.S. General Staff began studies into the tactics used by the Wehrmacht, in order to exploit their weaknesses and to devise new strategies. In early 1941, General George C. Marshall developed a theory of a mobile “tank destroyer” force.

The idea was to create units equipped with fast and well armed combat vehicles which would serve as an “anti-armour arm” of the army. The creation of such units would also, in the view of the U.S. generals, permit regular tanks to fulfill their “original” role – exploiting breakthroughs in the front lines and causing chaos in the rear areas. Among the proponents of this theory was the Chief of Staff of the General Headquarters – General Leslie McNair.

This high-level support quickly resulted in the creation of the Tank Destroyer Center at Fort Meade in the state of Maryland in late 1941. Soon, the army began to look for projects suitable to be dubbed as a “tank destroyer”.

There was, however, a problem – at the time, the U.S. did not have a lot of guns or vehicles which would suit that category. An interim solution, though, was quickly spotted. In June 1941, the Ordnance Department quickly decided to create a new tank destroyer by mounting a M1897 75 mm field gun to the M3 Halftrack. The prototype of the new vehicle, dubbed the T12 Gun Motor Carriage, was quickly completed and serial production started in September 1941.

The combat debut of the new vehicle took place in December 1941 during combat against Japanese forces in the Philippines. After including changes to the design (such as the enlargement of the gun shield), the new tank destroyer was standardised under the designation “M3 GMC”. It quickly became the main tank destroyer of the US Army and was used in North Africa during Operation “Torch”, as well as in the Pacific Theater where its cannon was mainly used as a “bunker-buster”.

From the outset, the U.S. brass knew that the M3 GMC was only going to be a stopgap measure. This was why in May 1942 a new tank destroyer prototype was presented – the T35E1. It was based on the chassis of the M4 medium tank and was armed with a 3-inch anti-tank gun. It was then decided to push the T35E1 into serial production and standardise it under the name “M10 GMC”.

The new tank destroyers started to reach the frontlines in 1943 and took part in battles in Tunisia, Italy, France and the Pacific. The British also received the M10 tank destroyers under the Lend-Lease program; however, they decided to rearm them with the 17-pounder anti-tank gun to further boost the anti-tank potential of the vehicle. M10 GMCs armed with the 17 pounder cannon then became known as the “Achilles”.

Engineers in the U.S. submitted new design proposals for even more powerful tank destroyers. After the Tunisian campaign, it became apparent that the 75 mm M3 gun was not fit to fight new German tank designs. This resulted in the abandonment of any projects featuring this gun – this included the T67 prototype tank destroyer. Priority was then given to the development of the T70 prototype, armed with a much more potent 76 mm gun.

In April 1943, the T70 prototypes were tested on the Aberdeen Proving Grounds and, after incorporating necessary changes, were standardised and placed into serial production under the designation "M18 GMC". The new tank destroyer was an overall improvement over the M10 – while it had much thinner armour, it was armed with a more powerful gun and possessed better mobility. The Hellcat made its debut in combat on the Western Front of Europe in 1944. By the end of the conflict, it was deemed to be the most successful U.S. Tank Destroyer.

Even earlier than this, the U.S. Army began the project of up gunning the M10 Gun Motor Carriage. The appearance of the Tiger heavy tank in Tunisia highlighted the need to replace the 3-inch gun of the M10 with a more potent design. The saviour was quickly found – the 90 mm M1 gun. The new prototype became known as the T71 Gun Motor Carriage and was tested in Aberdeen in March 1943.

The results of the tests satisfied the U.S. brass who quickly ordered a batch of 500 vehicles to be produced under the designation "M36 GMC". The new tank destroyers reached the European Theater of Operations in August 1944. They were generally liked by their crews, especially for the more powerful 90 mm main armament.

After the Second World War, the doctrine of the use of tanks in the U.S. Army was changed. Combat experiences showed that Tank Destroyers were far too specialized vehicles – while they were able to effectively battle enemy tanks, their thin armour meant that they were vulnerable to artillery, mines, and portable anti-tank rockets carried by enemy infantry. In the eyes of the U.S. top brass, the Tank Destroyers were a dead end – this is why after the war, all development of new tank destroyers was stopped and the Tank Destroyer force was disbanded.

With an upcoming Update, we will introduce the
'Emblem of the 628th Tank Destroyer Battalion' decal to War Thunder: 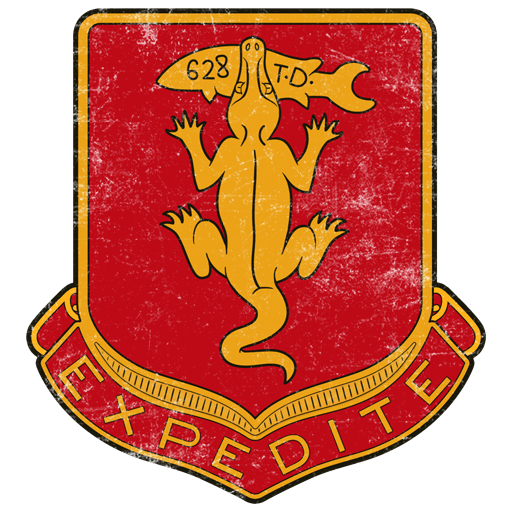 Did you already get a chance to play the US tank destroyers?
Which is your favorite vehicle so far? Let us know in the comments!