B-57B Canberra [Decal Included]
12 May 2015 Vehicle Profile
Attention! This news was published on the old version of the website. There may be some problems with news display in specific browser versions. 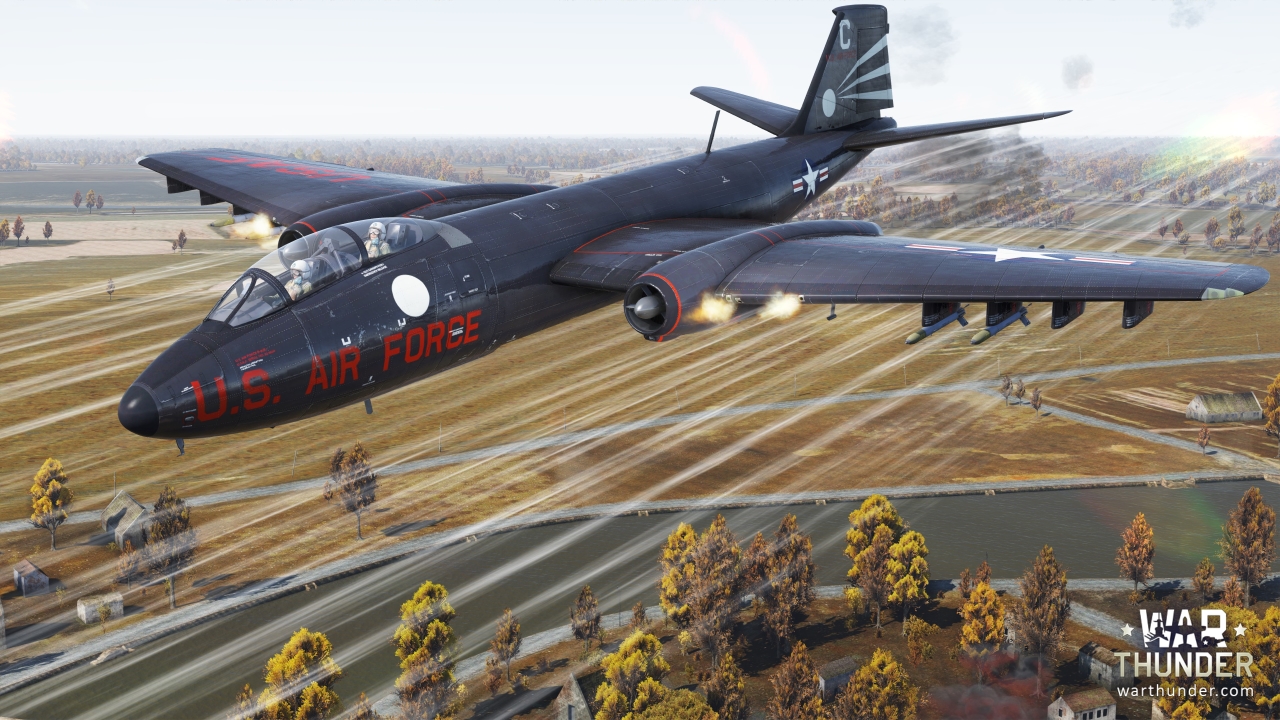 The B-57B in War Thunder

Concluding the legendary US Bomber line within War Thunder, the Martin B-57B jet bomber is the US modification of the famous British aircraft that leads away from the standard gameplay found on most US heavy bombers before it. Placed well within Era V after its predecessor, the B-57A, with a BR of 7.7 in Arcade Battles and 8.0 in Realistic and Simulator Battles respectively, The B-57B focuses more on low level ground attack by comparison to its predecessors and can carry large amounts of offensive external weaponry.

Unlike the B-57A model before it, the B-57B included numerous improvements and modifications to the airframe and armament that allow it to play a much more aggressive and offensive role in Battle. Able to mount up to 16 x 127mm HVAR rockets on its external pylons in conjunction with heavy bomb loads, the B-57B is best suited to taking out armoured targets or naval targets such as Destroyers and Cruisers.

As well as its ability to deliver massive offensive potential to targets at high speeds, it is also equipped with 8 wing mounted 12.7mm Browning M3 machine guns that hold a healthy 2800 rounds of ammunition, allowing it to attack light targets with ease, but also provides air-to-air combat potential for pilots. Another novel feature of the B model, is its rotating bomb bay that can hold large stores of a variety of bombs to complement its wing mounted payloads. With a maximum potential load out of 8 x 1000lb bombs coupled with 8 x 127mm HVAR rockets, the B-57B is one of the most versatile aircraft in game at Era V.

Whilst a lone B-57B out in the open is an easy target for intercepting aircraft and is no match for the likes of the MiG-15 or CL-13 in combat, communication and coordination with  teammates will allow pilots of this aircraft to effectively strike targets of strategic importance with precision and to devastating effect. Equally organising squads paired with escorting fighters who can work in conjunction with B-57s or even a whole wing of attack aircraft can have a massive impact on top tier games.

By comparison to its contemporary jet attack-bombers of other nations, the IL-28, Arado C-3, Canberra B (I) 6 and R2Y2 series, the B-57B can carry the largest payload thanks to its external stores, making this the ideal choice for players who prefer more aggressive and direct attack roles in the skies.

The B-57 Canberra in history:

The Martin B-57B was a development of the licence built version of the British Canberra B2, the B-57A. After its impressive performances at the Farnborough airshows in the early 1950s, the United States of America were keen to acquire the record setting jet bomber to fulfill the role of fast attacker similar to their current A-26 model. America had no suitable replacements for the Invader’s position and experiences in Korea had proven the value of a Interdictor attacker.

As such, licence production of the Canberra was given by English Electric to Martin for the B-57A. Whilst the A model was essentially the same as the British variant, the B model had numerous improvements and changes over the A model that distinguishes it from the original Canberra design. Features such as a redesigned canopy that required 2 crew rather than 3, newer engines, improved wing strength coupled with pylons for large external stores, more effective airbrakes and the Martin’s reduced drag rotary bomb bay from previous test aircraft were all included into the B model. As well as this, the B-57B also had offensive armament in the form of 8 Browning M3 machine guns with 4 in each wing, however this was later updated to 4 x 20mm M39 cannon.

All of this combined lead to the emergence of a highly effective interdictor aircraft that now differed greatly from its British counterpart to which it was based upon. Even with the rapid pace of jet aircraft development, the B-57B continued on in service thanks to its flexibility and versatility of combat roles. Numerous loadouts and configurations existed that allowed for a multitude of possible tasks including interdiction, reconnaissance or high altitude bombing. Whilst the primary models would retire in the late 1970s towards the early 1980s, highly modified variants still continue to serve in research and development roles for NASA even today.

With one of the upcoming Updates, we will include two new decals to War Thunder:

Did you already unlock and fly the B-57B Canberra?
Share your experience with us in the comments!