Grumman F7F-1 Tigercat [Decal included]
23 April 2015 Vehicle Profile
Attention! This news was published on the old version of the website. There may be some problems with news display in specific browser versions.

In 1942, after an unsuccessful XF5F Skyrocket (and XP-50, its land-based modified variant) project, Grumman Aircraft Engineering Corporation began work on an improved aircraft using the same twin-engine concept as the Skyrocket, which they named the XP-65. It was only a year later, however, that this project was cancelled, and Grumman began work on an entirely new plane based on the XF5F concept. This plane was intended to be operated from new, large Midway-class carriers (the first vessel being the USS Midway, which was commissioned in 1945) and Grumman had two main goals in sight – the plane would have ground attack capabilities, and it would be able to outperform and outgun any other fighter of that time. The maiden flight of the prototype, titled XF7F-1, occurred in December 1943, and was rushed into production in 1944 under the name F7F-1 Tigercat, continuing the Grumman’s tradition of giving planes “cat“ names.

The Tigercat was designed for two things – speed and firepower. The first of these was achieved by the combination of its sleek hull and two massive 18-cylinder Pratt & Whitney R-2800-22W Double Wasp radial engines, producing 2100 horsepower each. With these power plants, the Tigercat was able to achieve a maximum speed of 700 kph (435 mph) at an altitude of 6706 meters (22 000 feet), and had climb rate of more than 1372 meters (4500 feet) per minute. It was nearly 114 kph (71 mph) faster than the F6F Hellcat, and Captain Fred M. Trapnell, one of the US Navy’s best test pilots, was quoted saying: “It’s the best damn fighter I’ve ever flown!“ The Tigercat’s firepower was no less impressing. The Tigercat was armed with four 20 mm M2 cannons in the wing roots, and four .50 M2 nose-mounted machine guns. Additionally, it could carry up to two 454 kg (1000 lb) bombs on underwing racks, or one torpedo under the fuselage. It was also the first US Navy twin-engine fighter ever accepted into service, and the first US Navy fighter ever to use a tricycle landing gear configuration.

However, air tests and trials proved that the Tigercat was simply too overpowered for Midway-class carriers. Its landing speed was too high and it suffered instability in single-engine flight. The arrestor hook design was also proven to be unreliable. As a result of these multiple issues, the Tigercat was then assigned to be used as a land-based fighter in the US Marine Corps service. Deliveries started in April 1944, but problems with carrier operations clearance and changes in its operational requirements caused significant delays. As a result, the Tigercat was too late to participate in World War 2, and only 34 aircraft of initial F7F-1 versions were made. Tigercats eventually saw combat at last, but no sooner than during the initial stages of the Korean War, where F7F’s managed to shoot down two North Korean Polikarpov Po-2 biplanes. Subsequently, due to the developement of jet fighters, Tigercats were phased out of service, with the last of them retiring in 1954.

In terms of gameplay, the Tigercat, put simply, is a brute of an aircraft. It goes fast – both at high altitudes and at sea level, allowing it to easily escape from most other propeller fighters that may attmept to follow. Also, with an altitude advantage, it can even catch up to first-generation jet fighters. It also has a high climb rate – there are only a few aircraft on any given battle rating that can match it, and most of the time, you will have a comfortable altitude advantage. This is crucial if you want to use the Tigercat as a boom-and-zoom and energy fighter, as it excels in these roles due to its impressive energy retention, firepower and climb rate.

Regarding firepower, the Tigercat truly is a beast of the skies. Four 20 mm cannons and four .50 machine guns, clustered around the center axis, coupled with generous ammunition supply and high fire rate (it can fire 7.68 kilograms, or 16.9 lbs, of lead per second) mean that it is bad news for bombers and any fighter foolish enough to go head-on against it. The Tigercat’s speed and bomb load also makes it a useful attacker against ground forces in tank battles, as you can approach your target, drop your bombs, and escape before enemy anti-air units can detect you effectively.

Combining speed, climb rate and heavy firepower, the Tigercat is an extremely potent heavy fighter, and with a skilled pilot, can prove to be a match for any fighter on any given rank. Research further down its line also leads to the first US Navy jet fighter in the game, the F2H Banshee.

With an upcoming update, we will add
Emblem of the VMF(AW)-542 Squadron to War Thunder: 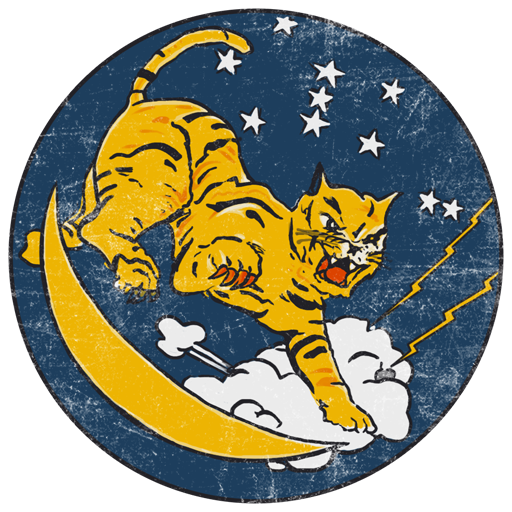 Did you try this aircraft already? What is your
opinion about it? Share your experience with us!