News
back to news
Attention! This news was published on the old version of the website. There may be some problems with news display in specific browser versions.
24 April 2013

Fearing the aggressive foreign policy of Japan, the United States government were keen to lend assistance to China when the Japanese invaded Beijing in 1937. A ‘Special Air Unit’ was authorized by President Roosevelt to be formed of volunteers from the US Navy, Army and Marines Corps. These pilots formed the AVG (American Volunteer Group) and were shipped out to Burma in the summer of 1941 to face the might of the Japanese military. Edward F Rector was one of these pilots.


Born in North Carolina on September 28th 1916, Rector was always bound for a life of adventure. A keen fan of the adventure stories penned by Rudyard Kipling, and told by his older brother from an early age that aviation was ‘going to be the coming thing,’ Rector joined the US Navy as a pilot immediately after graduating Catawba College in 1938. After successfully completing flying training at Anacostia and Pensacola, Rector joined the carrier USS Ranger to fly the Vought SB2U Vindicator dive bomber. When the call was made for volunteers to fly fighters in China to defend against the Japanese, Rector was one of the first to sign up. He would later state with a hint of irony that the salary was a major draw for him – volunteers would be paid $600 per month, with a further $500 bonus awarded for every aircraft they shot down.

After arriving in theatre, Rector and his comrades converted to the Curtiss P-40 under the tutorage of Claire Chennault, commander of the AVG. Working up during late 1941 in tactics to utilize against the more agile Japanese aircraft, the AVG first entered action in December, just after the Japanese attack on Pearl Harbor and the American entry into the war. Chennault taught his pilots to work in teams and always try to attack from a higher altitude, utilizing ‘boom and zoom’ tactics rather than closing in for a turning fight with the more maneuverable Japanese aircraft. 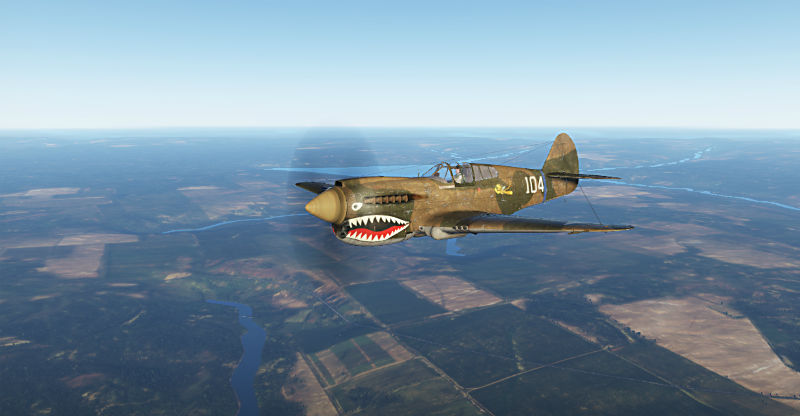 On December 20th Rector scored a kill in the AVG’s first combat, when he flew in a force of fourteen P40s which intercepted ten Japanese bombers. However, despite the best efforts of the AVG, Japanese victory in theatre was a grim inevitability. Having fought malaria and dysentery on the ground and the Japanese in the air, the AVG was officially credited with the destruction of 297 enemy aircraft in their seven months of operation, for the loss of 12 pilots. The AVG was disbanded in July 1942, with many of its pilots returning to the States or redeploying to other theatres. The unit passed almost immediately into legend, with their exploits being glamourized in the 1942 John Wayne movie ‘The Flying Tigers’. However, Rector, who had scored 7.5 confirmed kills during his time with the AVG (6.5 according to some sources), accepted a Major’s commission in the United States Army Air Force and stayed on in China as Commanding Officer of the 76th Squadron. This was in stark contrast to the AVG which, as it was technically a Private Military Contractor, did not use a rank structure.

Finally leaving China, Rector returned to the United States and was employed as a test pilot, his body of work including the North American P-51 Mustang. He returned to China to command the 23rd Fighter Group in 1945, again flying combat operations and scoring his last air-to-air kill in April, taking his total to 10.5 victories. Following the cessation of hostilities, Rector was appointed Director of Operations for the Military Assistance Advisory Group to the Chinese Air Force.

After a long, dramatic and successful career, Rector retired from the USAF in 1962, having achieved the rank of Colonel and been awarded such decorations as the Legion of Merit and the British Distinguished Flying Cross . He continued to work in aviation as a consultant in India, Europe and North Africa, but passed away in April 2001 at the age of 84. In an article on the AVG which featured in ‘LIFE’ magazine in March 1942, Rector was described as a quiet, hard-working country boy who was liked by everybody.

Curtiss P40 ‘White 104’ – After taking command of the 76th Squadron of the 23rd Fighter Group, Rector flew P40 ‘White 104’ on 4th July 1942 to score one confirmed kill and one probable near Hengyang. This P40 was also flown by aces Bruce Holloway, ‘Ajax’ Baumler and John Alison. The shark’s mouth design had famously been linked with the P40 since its AVG days. In addition to this, ‘White 104’ also sported a winged tiger design, reputedly created by the Walt Disney Company, in honour of the AVG’s nickname – The Flying Tigers.

Meet the author and discuss the article on the War Thunder official forums!