In the upcoming War Thunder Battle Pass season we will introduce flamethrower vehicles to the game! Meet one of the most famous flamethrower tanks of WWII - the British Churchill Crocodile, a tank prize in the “Smell of Victory'' season!

Experiments in equipping combat vehicles with flamethrowers have been going on in Britain since the very beginning of WWII. One of the tanks equipped with a flamethrower was the Churchill Crocodile - it was originally converted from the Churchill Mk II with a single-axle fuel trailer towed behind. A little later, the flamethrower kit was adapted for the Churchill Mark VII and Mark VIII heavy tanks, the flame projector and trailer could be installed on tanks even in the field. The flame projector was mounted instead of a BESA machine gun installed in the hull with a fuel line located under the base of the tank. The trailer with the incendiary mixture could be quickly detached from the tank using a pyro. The Churchill Crocodile received its baptism of fire during the Allied landing in Normandy, where these tanks were used to suppress machine guns and pillboxes on the beach. Then, Churchills continued to fight both as flamethrower or conventional tanks, since the conversion kit did not affect the main gun of the tank. Flamethrower tanks were used in France and Italy, and after World War II, the Churchill Crocodile was also used in the early stages of the Korean War. 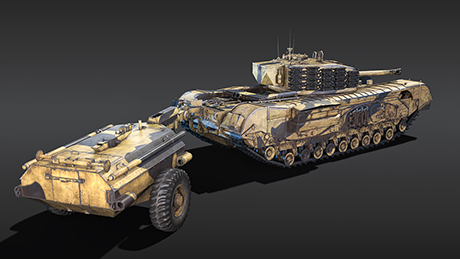 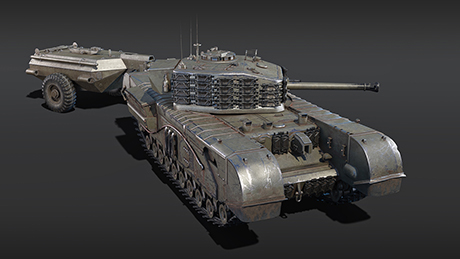 Very soon, a new season of the War Thunder Battle Pass, which we called the “Smell of Victory”, will start in the game. The Churchill Crocodile is the first flamethrower tank in the game and one of the main prizes of the new season. Let's take a closer look at this amazing machine!

Flamethrowers on tanks will have a similar mechanic to airborne napalm. They do little damage to heavily armoured targets, although still have a good chance of setting fire to the engine. But the napalm effect to lightly armoured targets is way different! Tank AP rounds oftenly pierce such vehicles with little or no damage at all, but the flamethrower fuel is capable of instantly disabling the crew in open compartments and does tremendous damage to unprotected modules. Tank flame projectors fire long jets of fire mixture under pressure, and being fired in arc trajectory, are able to get the enemy behind a small shelter.

The British Churchill Crocodile is one of the most famous flamethrower tanks in history. It is converted from the Mk.VII modification with a 75mm cannon and excellent protection. The hull-mounted machine gun is replaced by a flame projector, fed by a fuel trailer attached behind the tank. Thanks to this trailer, Churchill Crocodile has the highest number of charges of fire mixture amongst tanks, and also becomes the longest tank in the game!

The flame projector has limited targeting angles, and an aspiring commander will have to turn the entire hull towards the enemy. The tank is famous for its incredible survivability on the battlefield, but the mobility of the steel giant and quite weak AP rounds are definitely among the Churchill's shortcomings.

Imagine: You are a dinky little SPAA running around with your SPAA friends. Your friend turns a corner ahead of you. Silence. Then a burst of flame and muffled screams. You stop. A loud engine draws closer. The ground rumbles. Your heart shakes. Suddenly a behemoth emerges from the smoke and flame. In your panic, you believe it to be Satan himself. In the next instant your skin is melting and your screams fill the air before dying out as your vocal chords are boiled away. Return to hangar.

Wait, so that trailer is not a field kitchen?!

Obviously it's not a fully fledged field kitchen... It's an impromptu barbecue!

will the flamethrower stop working if the trailer is blown up?

Will the controls for firing the flamethrower and coaxial machine gun be separate, or will there be an option to bind it to secondary weapon like the hull cannon on the M3 and B1?

Any chance the Churchill models IV & VIII will be able to switch their main armament? Historically, the later churchill turrets could be fitted with the 6pdr or the OQF 75mm and even the 75mm M3! (Which was salvaged from wrecked Shermans!)

Nice tank! Looking forward to it. Can the trailer be jettisoned? Historically the crew could disconnect it from within their tank.

I'm curious about this as well. Honestly, I'm just curious how this whole trailer schtick is going to work, period - This will be the first vehicle in the game with anything even like a separate trailer, correct?

No doubt why this update's called 'Fire & Ice'. Finland's the new nation joining the tech tree list...that we knew for a while. And now comes...the 1st flamethrower tank, courtesy of Britain's 'Petroleum Warfare Department'...& a veteran of the fights in Normandy from D-Day onwards. I'm sensing that quite a lot of players are headed for one mass barbecue. How would they prefer to be cooked? Four choices: 1. Rare. 2. Medium Rare. 3. Well Done. 4. Totally Burnt to a Crisp. 🤣

Will we get more flamethrower vehicles? Like the KV-8? Preferably researchable..

dose the trailer ever blow up or detach itself if its destroyed?