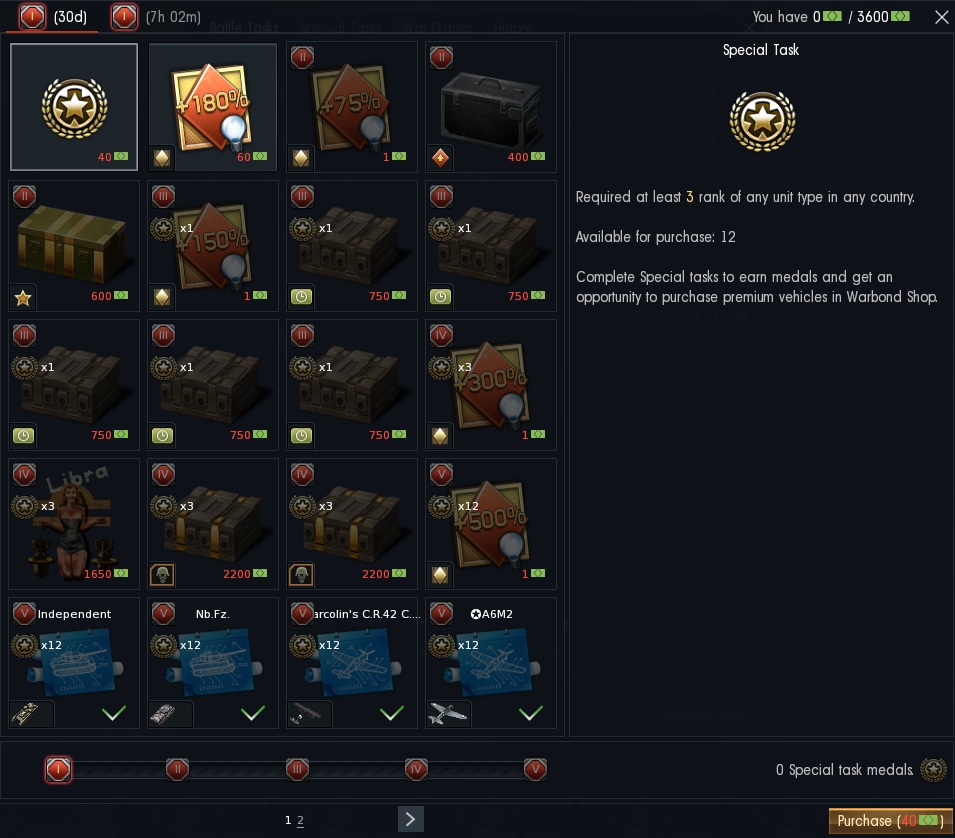 Good news for those who still haven’t earned enough August warbonds. Warbonds duration period will be prolonged for a few days - follow the news!

Warbonds duration period will be prolonged for a few days.. Is that means the rank 6 and also updated battle tasks will also come after these 10 days?

It was said a couple updates ago there will be no more major updates lol just small updates, has your plans changed from then as there has been and looks like there will be many more major updatesto come! It's good to see how much attention this game gets over a verylong period. Thanks and keep up the work! *cough cough* PSVR!!!

Why are not Warbonds for SB to? SB players are discriminated :(

Still not available in SB EC right? If so then it's as useless for me as before o7

https://imgur.com/a/JS8Mw Excuse me? 8.3? So much for that decompression

Nice work finding this though!

Byte9, Wait what? ATGMs are 8.3 already, so the new vehicles are just gonna sit there too? they all should be 10.0+

YES! The first Advance in Game i read since 6 Months. Sounds great and interesting! GJ Gaijin

Could you implement this system to Simultaor mode too? Or ability to buy Warbonds with golden eagles (or SL, don't care). I don't mind if you offer "regular" premium vehicles with warbonds since I can buy them with real money, but I feel really fustrated when you offer a hidden event plane which cannot be purchased.

In SB EC you can't even unlock plane skins. I can understand that some tasks giving faster progress or unique stuff might not be balanced for EC but skins? It won't ruin game even if we get them all in one battle - will it?

so if i understand correctly you can now save warbonds for items. is this for just 2 month or for as long as you save?

no expiration date, however maximum amount of warbonds you can keep is 3600

Senio, Let's say i reach 3600 warbonds. Can i have them for a year or more until there is something in the shop i want (a particular plane for example?) Warbonds colors won't make any difference anymore,right?

You can save them without time limit.

This all seems very confusing

they dont expire and more, its pretty simple. READ. its hard, i know.

Sadly, I see the other edge of the two-sided blade. While it is nice to be able to save up warbonds for those that have limited time, I see that you have also increased costs of several items. (decal from 1150 to 1650, Decorator box from 1500 to 2200). Also if I am reading the star-system correctly, you can purchase 12 stars per cycle, and a vehicle takes 12 stars, a decorator 3 stars. This stops high-warbond earners from doing things like getting both a vehicle and a decorator box in 1 cycle

Well there has to be some breaking point ¯\_(ツ)_/¯ It is still an improvement.

Although it does stop you from getting both in a single month, since the warbonds themselves won't expire you can save them up to buy the medals for next month. Lets you take a break once in a while. Personally I find the task for destroying bases hilarious though since they've made it all but impossible due to self-destructing ground units.

Expensive? You can get premium vehicle FOR FREE, just by playing the game. And we are the greedy here? Wow.

Stona_WT, I agree with Stona, what do you lose from it? Do a few basic tasks daily and you can earn some decent free stuff

What do you expect? Do you think that you can get a few free vehicles each month for doing nothing? Your reaction is absolutly disrespecting to the Gaijin Team who just give you the oportunity to get premium stuff without paying.

dark_vader97, Thanks! :) At least someone understands the changes! :D