Successor of a Legend: the T-44
26 January 2016 Profile
Attention! This news was published on the old version of the website. There may be some problems with news display in specific browser versions. 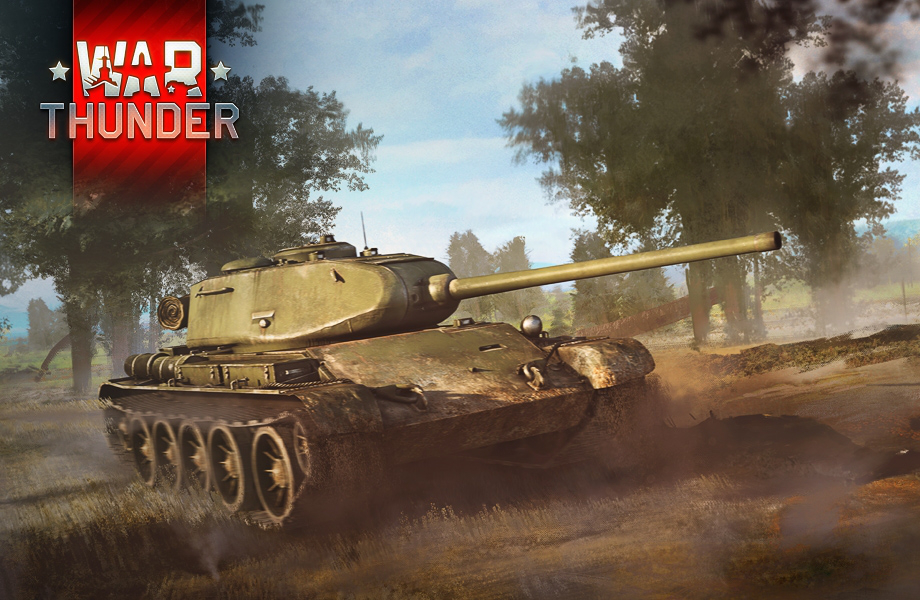 As a direct successor of the T-34-85, both in reality and in the game, the T-44 truly was a pioneering tank construction paving the way for many modern Soviet tanks. In the game, it will provide you with great mobility and good degree of armour protection.

In the game, the T-44 medium tank is a direct successor to the T-34-85 in the Soviet tank technological tree and is located at Rank IV with a current BR value of 6.3. Veteran players with the T-34-85 will instantly recognize the turret and the gun, as the T-44 is armed with the same ZiS-S-53 85 mm gun as the T-34-85, but all further similarities end there. Even from the first look, you can see the different and more modern-looking layout of the tank. In contrast to the T-34-85, the turret has been moved to the middle of the hull and the tank is noticeably lower, with an extremely sloped frontal armour plate. These changes were made possible mainly by one important aspect of the construction - the location of the engine, the V-44 V12 diesel engine producing 520 horsepower, to a position perpendicular to the axis of the tank. This change, along with the removal of hull sponsons, allowed the crew compartment to be built with more space and subsequently, more comfortable for the crew. You can see the unusual engine placement in the game via the X-ray inspection tool - at the time, it was quite a unique aspect.

As already mentioned, the armament of the T-44 is identical to the T-34-85’s gun. The ZiS-S-53 85 mm tank gun offers up to 142 mm of penetration with the basic BR-365A APHEBC ammunition, while the top BR-367 APCBC post-war round offers you up to 159 mm of penetration. While this is an improvement over the BR-365K APHE round (aka the top round of the T-34-85), it is still overshadowed by other medium tank guns at the given BR spread, such as the KwK 42 L/70 on the Panther, the 90mm M3 gun on the T25, or the British OQF 20-pounder gun on the Centurion Mk.3. You can boost your penetration up to 230 mm by using BR-367P APCR rounds, but against sloped armour, this round will struggle to penetrate like any APCR round in the game. That said, it is obvious the firepower is not exactly the strongest trait of the T-44. In fact, it was this very problem which in real life that led Soviet engineers to develop upgunned T-44-100 and T-44-122 prototypes, armed with 100 mm and 122 guns respectively.

While the improvement in firepower is not so noticeable when comparing the T-34-85 and the T-44, the armour protection is a whole different matter. The T-44 sports a 90 mm thick frontal plate sloped under at 62°. Compared to the 45 mm thick armour of the T-34, the T-44 offers twice as much effective frontal armour thickness as the T-34, and even surpasses the frontal hull armour protection of the equally tiered Centurion Mk.3 or the Panther Ausf.F tanks. We also should not forget the low profile, which allows you to use the terrain to either provide you with hardcover, or to conceal your movement. However, the lower profile of Soviet tanks came at a cost of poor gun depression, and the T-44 is no exception, limiting your choice of hull-down positions considerably.

The frontal armour is however far from invincible! Your frontal glacis is very bouncy, but can still be penetrated by some guns and as the fuel tank is located directly beneath the frontal plate, the frontal penetration will likely result in fuel fire or even detonation of the fuel tank. The front of your turret is then only 120 mm thick and despite it being oblique, it will be still penetrated by nearly any tank gun at the given BR spread with some being able to penetrate your turret even at long range. Here, we would suggest reducing your ammunition load to empty the ready rack, located at turret’s rear - this will prevent ammunition detonation in case of turret penetration.

It is quite obvious that the T-44 is not by any means intended to soak up shells - but it would be a mistake anyway to expect anything like that from a medium tank, which relies primarily on its mobility. Speaking of mobility - if you like to move fast, the T-44 will certainly not disappoint you, as it inherits a great degree of mobility from the T-34. On paved surface, the T-44 can achieve a top speed up to 60 kph, has very good acceleration and with a trained driver, it is pleasantly agile as well. Combine this with the mentioned low profile and you can zip around the map and reach your favourite positions quickly.

So if we sum things up, we have a tank, that has great mobility and agility, somewhat bouncy but not impenetrable armour and a gun, which is maybe effective at around BR 5.3, but will struggle at BR 6.3. This sounds like a recipe for a good flanker, doesn’t it? In tight city maps such as Cologne or Stalingrad, the T-44 is great at out-circling lumbering heavies and placing shots in their flanks, as well as in capping target zones in Domination and Break modes. On large open maps such as Mozdok or Kursk, the T-44 can be used to outflank the enemy and either cap the enemy’s base (when playing Battle mode), or rush into the enemy rear and surprise any enemy tanks by shooting them from behind! Stay mobile as much as you can and engage only when you know you can penetrate - your tank is simply not sturdy enough to survive head-on shootouts with enemy heavy tanks and tank destroyers.

In the reality, the T-44 was introduced into service, but was never used operationally. In the game however, there is no shortage of combat service for the T-44, and if used right, it will serve you well as a highly mobile effective medium tank. The experience earned on the T-44 will then allow you to invest in the much more famous T-54 main battle tank, which shares more than a playstyle with the T-44. In fact, the T-54 is basically just a modified T-44, and since the T-54/T-55 main battle tank series turned out to be the most produced tank of all time, which still remains in active service until today, we can safely say, that the T-44 was a true pioneer of a tank.

If you want to know more about reconstruction of a real T-44, click here!