M16 MGMC - The Meat Chopper
14 January 2016 Profile
Attention! This news was published on the old version of the website. There may be some problems with news display in specific browser versions. 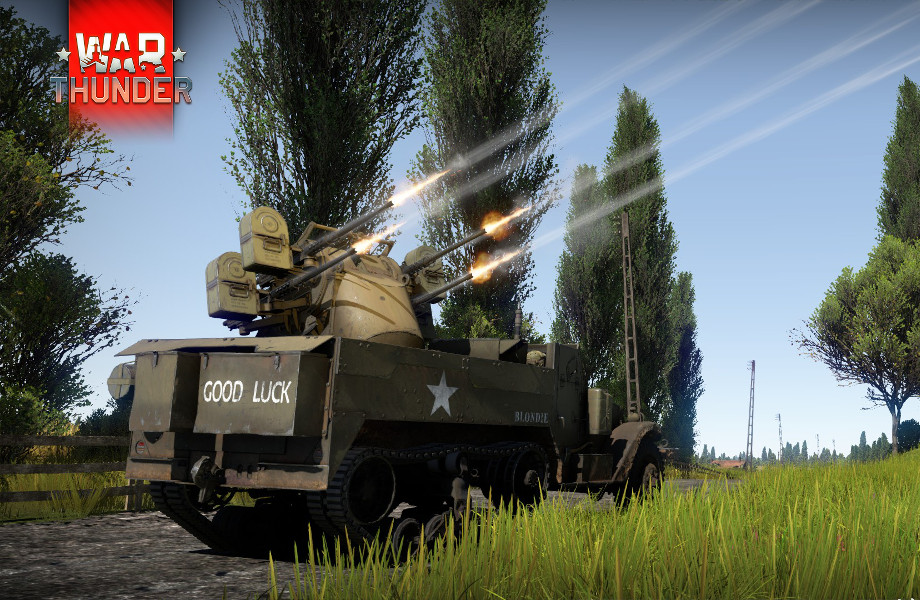 The first US Self Propelled Anti-Aircraft (SPAA) vehicle was the M13 MGMC, an M3 half-track carrying an M33 Maxson mount with two .50 calibre (12.7mm) guns. The electrically powered mount could rotate a full 360 degrees and elevate almost vertically, giving full defensive coverage against aircraft. Entering service in time for the invasion of North Africa the M13 performed well but if two guns were good, four were better. The Maxson mount was therefore modified to take four .50 calibre guns and became the M45 quadmount. When fitted to an M3 half-track the combination was designated M16 MGMC. The M45 could also be towed on a trailer, or mounted on an M5 half-track as the M17 MGMC; the full production run of the M17 was supplied to the Soviet Union under lend-lease.

In War Thunder the M16 MGMC is found in Rank II of the US tree, the second SPAA vehicle after the M13. Its primary purpose is, of course, to engage enemy aircraft. In this role the .50 has a shorter range and is less destructive than higher calibre AA cannon, but the M16 makes up for this with its rate of sustained fire. You can try taking pot-shots at high flying aircraft but for the most part it is worth holding off until the enemy is within half a mile (800m) before opening up with a sustained burst.

One or two hits are not enough to destroy an aircraft, unless you take out the pilot, but may well force an opponent into evasive manoeuvres making it more difficult for them to attack friendly tanks. When using Armor Piercing Incendiary (API) or Armor Piercing Incendiary Tracer (API-T) ammunition you also have a good chance of starting a fire. The drawback of the latter is the high visibility that makes you an obvious target, and with an open top and thin armor the M16 is extremely vulnerable to even the smallest of bombs or machine guns. Use your mobility to seek cover behind buildings, if available, and be ready to move quickly if you hear the whistle of incoming bombs or artillery. If an enemy plane is heading right for you then you can try and duke it out; it gives you the best chance of hitting the pilot for an instant kill but you may well be knocked out in the process.

With the Allies generally holding air superiority after D-Day, M16s had comparatively few opportunities to engage German aircraft. One of their most notable encounters was in March 1945 when the railway bridge over the Rhine at Remagen was unexpectedly captured by US forces. The Luftwaffe made many attacks to try and destroy the crossing, even employing Arado Ar 234 jet bombers, but US anti-aircraft fire prevented any hits on the bridge. Amongst the defenders the M15 and M16 MGMCs of the 482nd AAA Battalion claimed 21 kills.

In the absence of enemy aircraft the M16 was frequently used against ground targets; it remained in US service in the Korean War and the M45 mount was used in Vietnam on trucks, primarily for ground combat as jet aircraft presented difficult targets. In War Thunder you can have some success against enemy tanks; frontal attacks against heavy armor are an extremely bad idea, but lightly armored tank destroyers and SPAA vehicles are prime targets. Using API ammunition the M16 can penetrate the thinner side armor of some lighter tanks and its mobility allows for rapid flanking manoeuvres, but this is a high risk strategy as any return fire tends to be fatal.

It is seldom worth starting a standard Arcade or Realistic tank battle in an M16; they are better saved for later once the enemy has started to spawn aircraft. In Arcade mode always try to land at least one shot on any enemy aircraft - their temporary nature makes pilots rather reckless, and if they plunge into the ground after you hit them then you can get a kill credit. In Realistic mode it is better to remain concealed, and only fire when you have a good shot. If you have unlocked the Artillery ability then try and stay within range of a captured point to be able to bombard it if the enemy starts to take control; trying to capture points yourself is very much a last resort. The M16 MGMC may not be a battle winner on its own, but like its historical counterpart it can provide valuable support to a team.