Developer's Diaries: New Progression System
26 November 2013
Attention! This news was published on the old version of the website. There may be some problems with news display in specific browser versions.

Update 1.37 will introduce a new progression system: to get access to the new aircraft a player will have to research the previous one in the branch. The number of ranks will be changed to 5 and they will be based on the actual periods in aviation development.

We planned the new system from the very beginning of development, but we are introducing it now, as the number of available aircraft in the research tree is close to the original planned release tree.

We are certain that with this new system the game will become more entertaining and varied both for experience players and new ones.

What is the new progression system?

All aircraft (as well as forthcoming ground units and ships) are now allocated within 5 ranks. When deciding whether an aircraft or a vehicle belongs to a certain rank, we consider its battle efficiency in the game and its period of aircraft development in real life. Thus later but “weaker” machines may be attributed to a lower rank and vice versa, but mostly one rank corresponds to a certain period of aircraft development.

To purchase a new plane from now on you should meet several simple requirements.

For example - the F4U-1d Corsair. To unlock it you must: 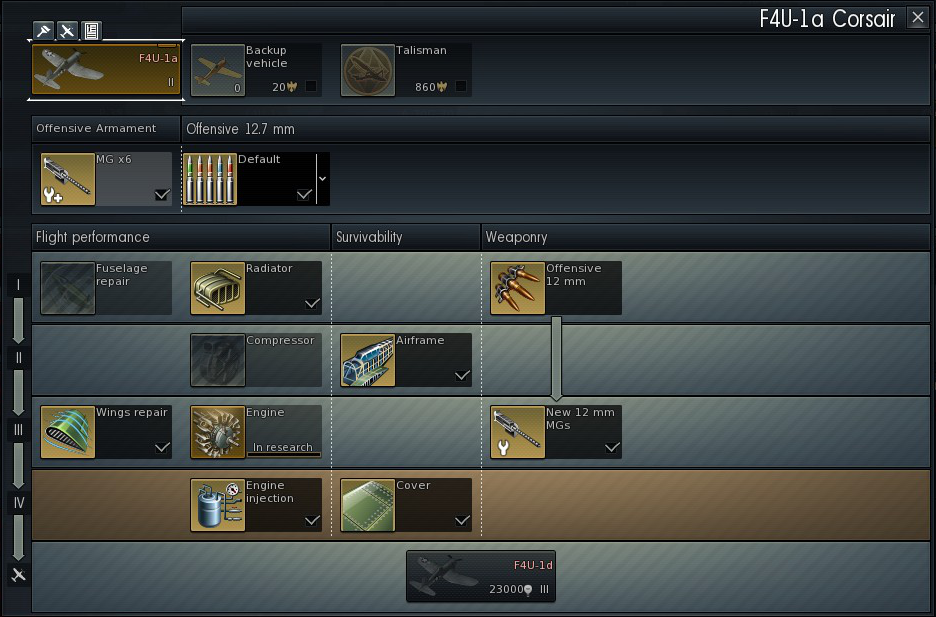 Modification menu. Observe that to research new aircraft in the line you don’t have to research all the modules. Also some experience gained from battles on this plane is spent to research an “Engine” modification.

2. Unlock the rank the chosen aircraft belongs to. Thus the F4U-1d belongs to rank III, which means we should unlock and purchase 3 planes from rank II. Let us choose, for example, F4U-1a and F6F-3a from the same branch and premium A6M2.

3.  And finally before we can take F4U-1d into flight we should research the plane itself choosing it from the other aircraft available for research. The process is similar to researching modifications, but research points will be from all the planes of the chosen nation you fly which will be used for research of the chosen aircraft. 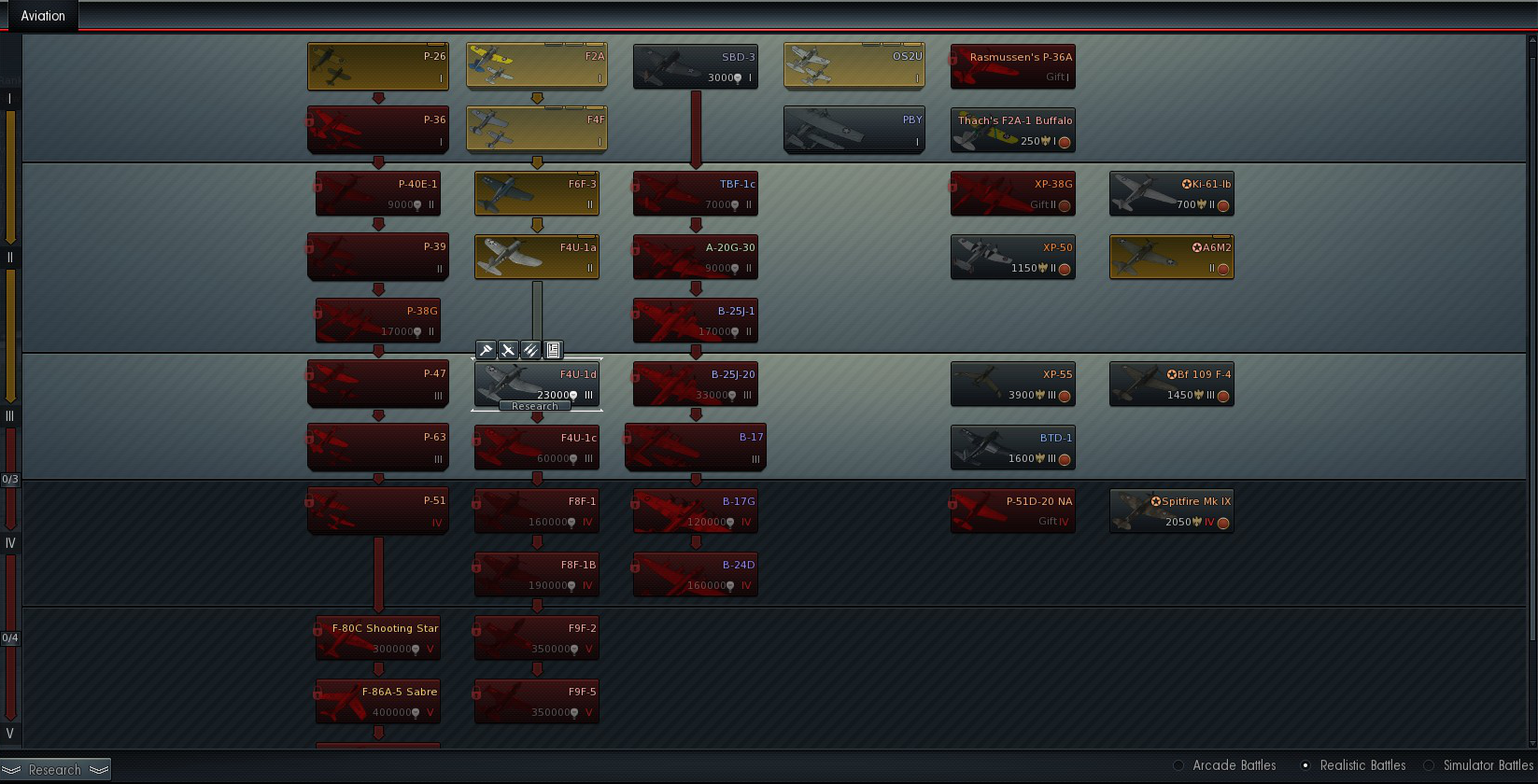 USA ranks. To unlock rank III you will have to unlock any 3 aircraft of the previous rank. Currently F4U-1d (rank III) is being researched

This all means that experience gained for successful actions in combat gives access to new modifications of the plane a player is currently flying and brings him closer to unlocking another plane a player has chosen.


We wanted to make the introduction of the new progression system non-problematic for both new and experienced players that is why all achievements, obtained modifications and purchased planes will remain. But please note that planes that are unlocked but not purchased will have to be researched once again in 1.37, because the whole system will be completely different.  So you have some time to purchase aircraft you are interested in!

What are the advantages of the new progression system?

First of all a player may focus on the branch he personally prefers and move quicker down that branch. Previously to access a new rank pilot had to gain enough experience to unlock all the planes of the rank. From now on unlocking the next aircraft requires less experience which means that progress to the top aircraft of the branch is quicker.

With the new system the player won’t have to leave the plane where he already has maximum experience and experience bar is full. Those who have low and mid tier premium aircraft will be even more satisfied  - they may use those planes to research any planes they want without limitations (though if rank difference between planes is more than 1 research it will be a little slower).

Finally we have the opportunity to provide better match-making and balance. The previous system took only planes’ rank and individual player’s efficiency into account, from now on balance will be affected by the aircraft chosen and its efficiency in a certain game mode. Previously players had been divided into 3-7 groups by rank (depending on the amount of players and chosen game mode), now these groups are clear, players maybe certain that no planes from 3 different ranks will meet each other in the battle, only 2. So the whole match making balance is much more accurate.

One of the most important advantages of the new system: due to the forthcoming release of ground forces we thought how to level the playing ground so the most experienced players won’t gain too big an advantage. The new system grants that opportunity.

You are looking forward to testing new aircraft and new opportunities? Then see you in the skies of War Thunder!