The F6F 'Hellcat'
17 November 2014 Vehicle Profile
Attention! This news was published on the old version of the website. There may be some problems with news display in specific browser versions. 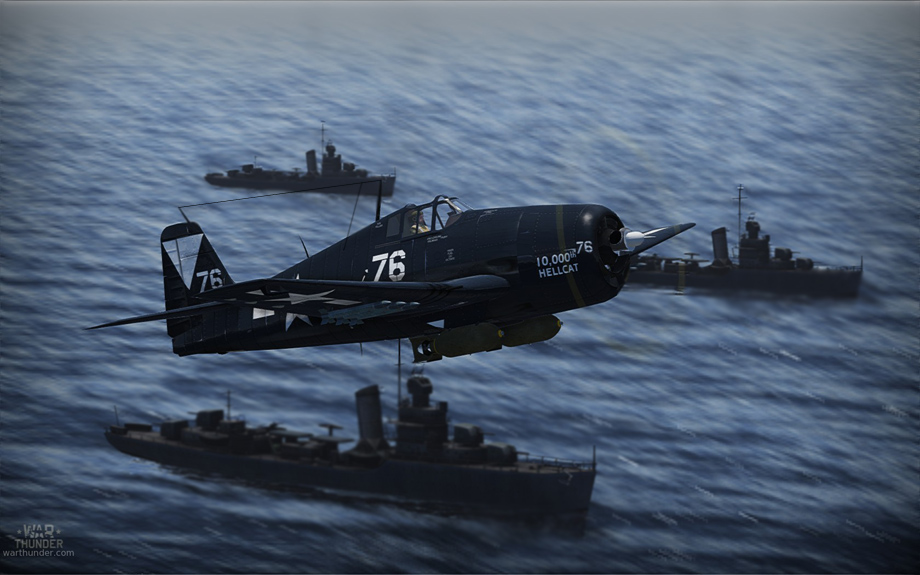 Whilst the Grumman F4F Wildcat proved to be a rugged and solid opponent for the notorious Mitsubishi A6M Zero, it was the US Navy’s use of pioneering fighter tactics which made it more of a dangerous opponent for the Japanese. A replacement for the Wildcat was needed, and that was precisely what Grumman intended to provide. In June 1942 the prototype Hellcat first took to the skies and it was clear that the Grumman ‘Iron Works’ had produced a winner.

With an incredible combination of speed, firepower and durability coupled with remarkably forgiving deck landing characteristics, the Hellcat was universally popular with its pilots. Over 5200 enemy aircraft were destroyed by Hellcats in the hands of American and British naval pilots; the US Navy even claimed an unprecedented 19:1 kill to loss ratio. World record holding test pilot Captain Eric Brown credited the Hellcat with being the greatest naval fighter of the entire war.

In looking at the Hellcat in War Thunder in this brief article, we will be concentrating solely on its performance in Arcade Battle. Like its historical counterpart, the War Thunder Hellcat possesses a number of key advantages, but also a few shortcomings.

First and foremost, the Hellcat is a true multirole aircraft. With six .50 cal machine guns it packs an incredible punch for its Battle Rating and, with a well aimed burst, is more than capable of destroying fighters of higher BRs. In addition to this the Hellcat can also be fitted with rockets and bombs; not only this – it can carry them all at the same time.

As a fighter, one of the Hellcat’s chief advantages is its firepower – as well as dealing a considerable amount of damage the Hellcat also carries a relatively large amount of ammunition. Obviously this firepower is of little use if the guns cannot be brought around to a target, but the Hellcat’s rate of turn is competitive against other aircraft of its size but again, like its real life counterpart, it cannot hope to match the rate of turn exhibited by light, Japanese fighters such as the A6M2 at low speeds. Especially in higher difficulty settings, like Realistic or Simulator Battles, the Hellcat can use this advantage of speed and power to get destinctively ahead of its opponents.

In terms of ground attack, the Hellcat is particularly strong. The six heavy machine guns make short work of any unarmoured ground targets but are also backed up by both rockets and bombs. With six rockets, the Hellcat has enough punch to take on lightly armoured targets but it is the two 1000 lb bombs which give it its real capability in the strike role – enough to damage if not destroy even the most heavily armoured of ground targets or warships. However, it is worth noting that even in the simplified physics of Arcade Battle, six rockets and two bombs carries with it a significant weight penalty so it is well worth considering jettisoning ordnance if the Hellcat is bounced by enemy fighters whilst attempting to knock out ground targets or ships.

Whilst the War Thunder Hellcat certainly has its critics and is not as universally popular with gamers as it was with its real life crews, it is a very useful multirole aircraft which can yield great success in Arcade Battle as both a ground attack platform and a fighter.