War Thunder and MSI present fan-video contest: "Vive la Liberté!"
13 June 2013
Attention! This news was published on the old version of the website. There may be some problems with news display in specific browser versions. 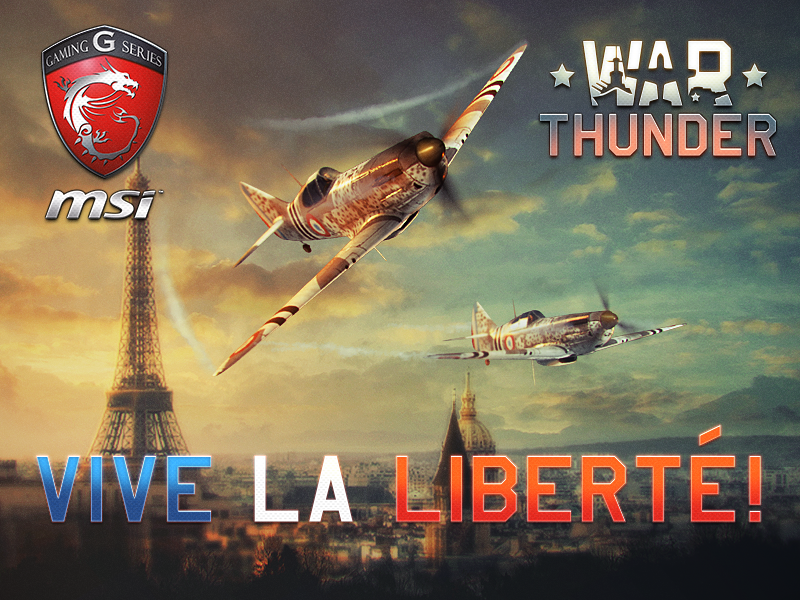 
War Thunder in partnership with MSI present fan-video contest: "Vive la Liberté!"  dedicated to the liberation of France! We invite you to make a unique War Thunder fan-video, that would reflect the essence of WWII air combat over France, struggling for freedom and glorious victory over tyranny. Create your video and share it with other players! We will choose the best of the best, most talented and creative movie directors amongst our pilots, and give you some truly amazing prizes provided by MSI: MSI GE40 2OC-001FR Dragon Eyes gaming laptop as an award for the first place of the contest, an awesome MSI N660Ti PE 2GD5/OC 2 GB gaming v-card will go to the one who wins the second prize, and an exclusive MSI Siberia V2 gaming headset for the third place. The winners will get special awards from Gaijin Entertainment: Golden Eagles, Premium days and unique premium aircraft!

Rules of the contest:

You should make an original fan-video, dedicated to liberation of France, by using only game replays or actual War Thunder gameplay.

Only gameplay of the open-beta stage is allowed (so it doesn't fall under NDA).

Not more than 1 video per participant.

You must be 12 years or older.


Requirements for the video:


In the video description, you should mention the website of the Game, the website of our partners (MSI) and give a link to a original post about the contest.

In the video title you should add “War Thunder|Contest|MSI”

Video resolution should be not less than 1280х720 (HD format)

Video should not break any rules of morale, ethics or law (domestic or international), as well as game rules.


The video should contain logos of both MSI and War Thunder being displayed for not less than 4 seconds. You may download them here and here. Fade-in and Fade-out of the logos should not be accompanied by too bright or unpleasant effects, stick to the regular fade-in and fade-out. Logos should also be displayed at the beginning of the video on a black background.

You may upload your contest video only on YouTube and Vimeo, other video-sharing websites are forbidden.

After uploading your video on the above-mentioned  website you should post a link to it in our special Forum Thread.

When posting your link on forums, don’t forget to mention your nickname and title of your work.

All submissions by authors located outside European Union could NOT be considered for prizes.

You may see the complete list of participating countries and discuss the news on the Official War Thunder Forum.