The long-awaited extension of the British SPAAG development tree is here! Today we’d like to show you Britain’s top-range SPAAG – the Falcon, armed with two 30mm automatic cannons. 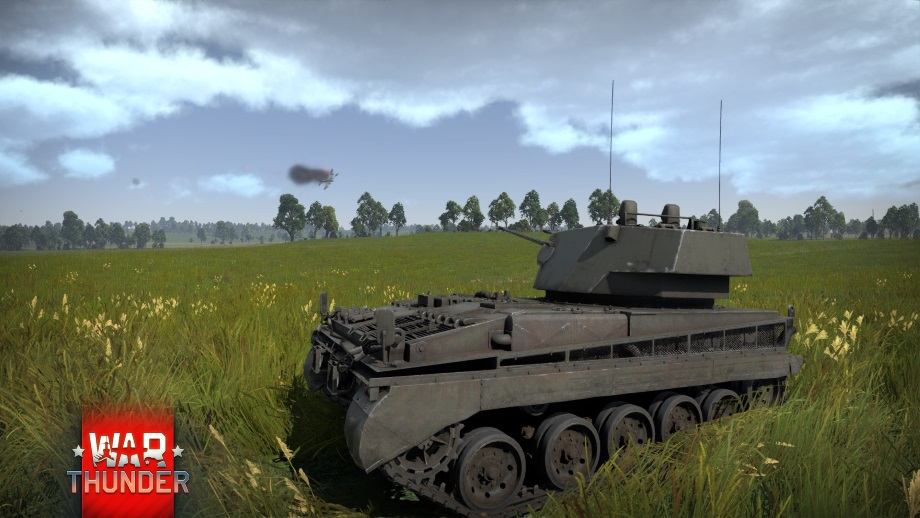 A single prototype of the Falcon was built for testing purposes. The chassis of the Abbot SPG was used for it, but the original howitzer was replaced with twin automatic 30mm Hispano-Suiza HS.831 guns. Aside from the armament, changes also reached the Abbot’s turret, which was reworked so that it could house the anti-air cannons.

Work on this anti-air gun for War Thunder was tough, but interesting. There is very little information available on this vehicle, so we had to request help from  The Tank Museum at Bovington, whose archives held technical documentation on the Falcon. As a result of our collaboration, War Thunder now presents the first full and precise computer model of this SPAAG in the world.

Using the documents we have, our model artists restored the appearance of the Falcon. The Abbot chassis underwent several changes – to prepare a prototype of the SPAAG, most of the detachable equipment was removed from the hull along with the flotation screen. The tracks are missing their rubber covers.

The turret turned out to be quite interesting – as you can see, both the commander and the gunner who sit inside the turret have their own observation instruments. The hatches on the sides of the turret serve for the extraction of fired shell casings. The characteristic lip along the centre of the turret underneath the guns was made so that the breech of the guns could be lowered in order to fire upwards.

In War Thunder, the Falcon will take its place at rank V of the British SPAAG tree. It has a crew of three: a commander and gunner in the turret, a driver in the front of the hull. The chassis is equipped with a diesel engine capable of reaching a speed of nearly 30 mph (48 km/h). The Falcon’s armour is comparatively light, which is characteristic of most SPAAGs. Its twin 30mm cannons fire up to 1200-1300 shots per minute together, with four types of shells available – two types of high-explosive shells with self-destruct fuses, a semi-armour piercing shell with a tail fuse (APHE-I) and an armour-piercing shell with a core for penetrating armoured targets (APCR).

In short, the Falcon is a very capable vehicle for rank V battles, capable of destroying both aerial and terrestrial targets. Try out this new addition in the War Thunder 1.57 update. See you in battle!

1. Do you plan to add other top-tier SPAA's to counter jet aircraft for other nations? And when?

Yes we plan to add Vulcan for the U.S,, Gepard for Germany and Shilka for the USSR. In one of the major updates after 1.57. Perhaps 1.59.

2. Will the Falcon able to compete against other nations' top SPAA's?

It will, since it will have powerful 30mm rounds and a rate of fire of 1200 shots per minute or even more.

3. What AP performance can we expect for the best penetrators available to the Falcon?

4. May this SPAAG get its APDS round?

Yes it will have APDS-T ammo

5. "What exactly are these high-explosive shells with self-destruct fuses? Timed fuzes? Proximity Fuzes? Both? Something else?"

"Well, basically it means both, it has a timed fuse that will make the shell explode at approximately 5km altitude. The self-destruct fuses were designed so that the shells would not fall from the sky on friendly troops."

6. Will it overheat? How will you implement it? The same way as for Kugelblitz - with the increasing spread?

Yes it will be implenented in a similar way.

7. There was not a lot of ammunition near the guns themselves, so reloading after every 2-3 bursts was long and painful, Will you implement that?

Where do you have that information from? We checked the schemes and documents for the Falcon - all ammo is loaded in 2 belts (1 per gun) and ready for shooting.