In the early 1950’s, Italian aircraft designers began work on developing a jet aircraft on the basis of a successful pre-war piston-engine race plane, initially with the goal of constructing a pure technology demonstrator. This aircraft - named Sagittario - took to the skies in January 1953, displaying promising performance.

Convinced of the aircraft’s potential, the aircraft designers continued work and developed the design further into the Sagittario 2. The new aircraft featured an improved design, a significantly more powerful jet engine and comparably heavy armament for an aircraft of its time. Two prototypes of the Sagittario 2 were built and test flown in 1956.

However, despite its state-of-the-art design and excellent performance, the Sagittario 2 faced many problems during development as its manufacturer - Aerfer - struggled to allocate enough resources into its development. As a result, the aircraft had a drawn out development period which meant that newer aircraft were entering service while the Sagittario 2 was still being tested. Because of this, the Sagittario 2 would fail to enter production as the procurement of the more promising Fiat G.91 was right around the corner.

While not getting past prototype stage, the Sagittario 2 would serve as a basis for the subsequent development of another jet fighter prototype. 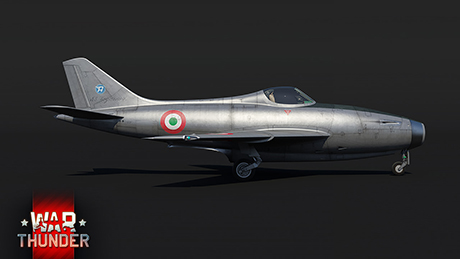 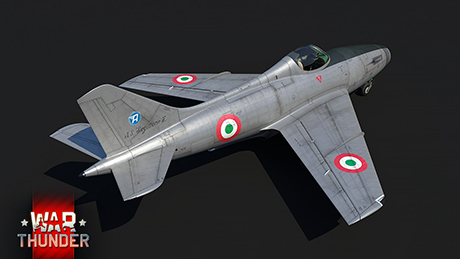 In War Thunder, the Sagittario 2 will be a new jet fighter awaiting all pilots at the higher ranks of the Italian aviation tree. Combining superb flight characteristics with lethal firepower makes the Sagittario 2 a very focused jet fighter and one which should quickly find fans among already seasoned jet jockeys in particular!

Glancing over the Sagittario 2’s visual appearance, in particular its streamlined fuselage and swept wings, already gives off a strong impression that this aircraft was built with performance in mind. And the aircraft’s performance figures certainly back up this sensation! Powered by a single Rolls-Royce Derwent Mk.9 turbojet engine - the same one used on modifications of the well-known British Gloster Meteor fighter - the Sagittario 2 can reach a top speed of 1,050 km/h at sea level. However, being an early Cold War era jet fighter means that the Sagittario 2 doesn’t come equipped with an afterburner, resulting in worse acceleration than some newer aircraft.

Fun Fact: During a test flight, the Sagittario 2 managed to exceed a speed of Mach 1 in a controlled dive, making it the first Italian aircraft to break the sound barrier.

Despite this, the Sagittario 2 remains not just fast, but also very agile for a jet fighter, thanks to its rather powerful engine and low take-off weight compared to similar jet fighters found at its rank. As a result, the Sagittario 2 offers its aspiring pilots very competitive levels of maneuverability, making the aircraft ideally suited for intense dogfights when things get really heated!

Having mentioned the Sagittario 2’s low take-off weight might get some pilots to think that the aircraft’s armament is fairly light, even more so considering that the aircraft is just a prototype. However, quite the contrary is the case! Armed with a pair of long barrelled high-velocity Hispano-Suiza Type HS.825 30 mm cannons, with 120 rounds per gun, the Sagittario 2 is more than adequately equipped to down any foe it may come across in the skies in just a few short bursts.

The Sagittario 2 will soon join the high ranks of the Italian aviation tree as a new jet fighter awaiting all pilots with the release of the next major update Red Skies. In the meantime, be sure to stay tuned to the news as we continue showcasing what other exciting new additions await you in the upcoming update. Until then, clear skies pilots!

Commenting is no longer available for this news
Rules
Conte_Baracca
22

This is what I am looking forward to the most. A unique Italian Jet. A beautiful jet. An interesting setup. It's got it all. Those cannons are gonna SLAY.

Yup. My most anticipated vehicles are this and the Concept 3.

It's going to be so nice seeing something so unique.

This is a very important addition that deserved its own devblog. Good job. And BTW, to add something to the historical background, this plane was designed by Sergio Stefanutti and built at Pomigliano D'Arco, near Naples (Napoli), southern Italy. And I live near it, just a couple of kilometres away from the factories where they made the plane and tested out. It's a joy to have it in the game. Now the Aerfer Ariete is needed.

This is honestly one of the best additions ever added to the Italian tree, these additions help flesh out the tree and make it more competitive. Thanks for this.

Hoping to see the Aerfer Ariete in the future :) But Sagittario 2 will be the after the patch props. Its one beautiful bird :)

Thank you very much for this plane

Amazing addition! I hope the Mb.326k will be next.

And soon. Been looking forward to that one too.

quite a nice looking jet! looking forward to this, the Dante and Dardo.

Please Gaijin, don't give it a 30k sl repair cost, the Re.2005 has already a cost of 30k sl, you can't continue in destroying the game with this stupid economy, consequence of the fact that you can't properly balance it. Instead of adding new useless era 7 br, you could just try to fix this absurd in game economy and decompress the brs. Why I have to play with my 1942 prop fighter against 1945 superprops? I still don't understand that

Please dont give it a big repair gajin :(

Leone prototype was never completed, so I don't think we'll have it in game. Ariete however would be cool to fly, I mean, it's even faster that the Sagittario 2. Aerfer really had some crazy designers!

MesserMorfeo, I mean, we literally have 3 R2Y2 paper planes in game to fill gaps, an incomplete prototype can't be that evil to add to reinforce the ita tree