The XM8 AGS was an experimental American light tank, developed by the FMC company in the early 1990’s in an effort to replace the Army’s outdated M551 Sheridan tanks. Now the XM8 AGS awaits all players in War Thunder as a top prize for tankers participating in the upcoming crafting event!

Development of the XM8 AGS began in June 1992 after the FMC company was awarded a contract to develop a new light tank to replace the dated M551 Sheridans in service with the US Army since the late ‘60s. In addition to keeping the vehicle lightweight, FMC also used available parts from other vehicles in service at the time, such as the Bradley and Abrams in order to reduce costs and simplify logistics.

By May 1994, the Army received six prototypes, all of which were extensively tested until 1997. That year, with plans for production already being made and the vehicle receiving its standard designation, funding for the XM8 was diverted to other projects, such as the promising M1128 Stryker. This ultimately resulted in the cancellation of serial production. Work on the XM8 continued however, with further developed versions being subsequently offered on the export market, albeit unsuccessfully. 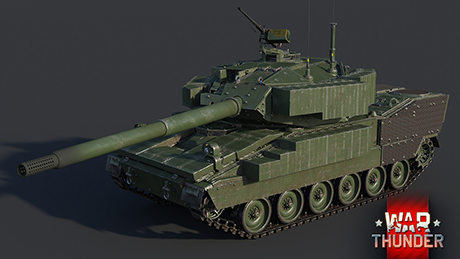 The XM8 AGS is a high rank American experimental light tank and also one of the top prizes awaiting players in the next crafting event coming soon to War Thunder. Like many other light tanks, the XM8 AGS sets emphasis on mobility and firepower. These two aspects are represented on the vehicle on one hand by the 105 mm XM35 rifled cannon, and on the other, by the 550 horsepower diesel engine, allowing the vehicle to reach a top speed of up to 44.7 mph (72 km/h).

The XM8 AGS also comes with the choice of two different levels of armor protection. In War Thunder, commanders will have the choice to outfit the XM8 AGS with either its basic ‘Level I’ or the heaviest ‘Level III’ armor package. The latter adds additional composite screens onto the vehicle, enhancing its protection at the expense of mobility, while the lighter Level I armor offers less protection but better mobility and access to smoke launchers. As a result, tankers will have the freedom to modify the XM8 AGS to best fit their playstyle, making it a valuable addition to any high tier lineup due to its versatility!

All tankers will have the chance to add the XM8 AGS to their in-game collection by taking part in the upcoming crafting event, starting soon in War Thunder. Stay tuned and good hunting!

Commenting is no longer available for this news
Rules
SenpaiFuzz
38

At least I'll be sacrificing a portion of my soul for a cool vehicle this time around.

Snail God is pleased with such offering!

Stona_WT, All hail our lord and savior the mighty Snail God!

3 USA Vehicles in one crafting event. That's allot of freedom.

I've been waiting for the XM8 to be added to USA tech tree for quite a while and they went ahead and made it into a crafting event vehicle? Why?

To be fair only one in the actual US tree

DreddMann, kinda they have different versions of these vehicles in their own techtree

personally this event feels a bit boring to me, a lot of stuff we already have, like a US DD, the SU-76 but with a different gun, etc etc. I just wanna see what event we get for april fools and hopefully it doesnt suck :)

Why make new and interesting things. When you can just asset flip some old stuff and call them "new"?

Shoudln't this be viewed as a postivive? Either the vehicles are boring enough for you so you don't have to spend a ton of time on it and/or the event vehicles are finally something unique, yet not too sought after, with some having equal or better variants in the tech-tee (later down the line)

TheAntiAirGuy, Positive that they want us to spend 12+ hours every day. To grind for something that are almost 100% identical to already existing vehicles in the TT's. And that we are not guaranteed to get. Because of shitty RNG and hard limit on how many parts/scraps or what ever it will be in this event. That we can get every day?

You are in fact famous now.

What ammo does it get tho 👀

The thing i want to know is what BR it's at.

[email protected], I'm guessing 9.7 with how modern it is, what shells it gets, and its armor protection

Dozer15, Using devs logic, manual that is posted in forum topic says it can fire M900.

Why aren't there any renders of the "base" version ;(

and why arent there M60T - Sabra ;(? gaijin add M60T to USA as standart vehicle

At least 1 of 4 vehicle will be new and unique. Rest are just asset flips.

Whatever you do don't even look at the VFM5 in the British tech tree. Just don't don't do it. It's absolutely, totally different to the XM8 and was in no way a simplified derivative, built by Vickers to appeal to the export market in the 1980s.....

mrbeast85, completely wrong, the XM8 derives from the CCVL tank prototype which the VFM 5 is a simplified derivative of. They both descend from the same tank so yes they are related, brothers almost.

And you must use market Comrade.