Yūgure was a Fletcher-class destroyer originally operated by the U.S. during WWII and loaned to the Japanese Navy in the late 1950’s. Soon, captains will have the chance to command Yūgure as she becomes available as one of the top prizes in the upcoming crafting event, beginning soon in War Thunder!

Prior to being loaned to the JMSDF, Yūgure was known as the USS Richard P. Leary (DD-664) and was one of many Fletcher-class destroyers built for the USN during WWII. Commissioned in 1944, the ship took part in some of the last major operations in the Pacific theatre before being decommissioned and put into reserve in 1946.

In 1959, USS Richard P. Leary as well as another Fletcher destroyer were loaned to the JMSDF and was renamed to Yūgure. In Japanese service, the destroyer was modified several times to better fit the anti-submarine warfare and training ship roles. Yūgure would end up serving with the Japanese Navy until 1974 before the ship was returned to the U.S. and ultimately sold for scrap in 1976. 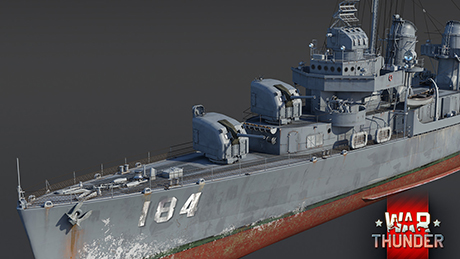 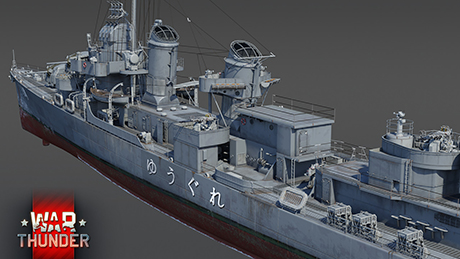 Yūgure will be one of the top prizes awaiting captains and participants in the upcoming event taking place in War Thunder soon. As a Fletcher destroyer, Yūgure retained many of this class’ signature features, such as its excellent versatility, while also incorporating some changes made by Japanese shipbuilders during her postwar service.

Distinguishing itself from other ships of its class, Yūgure lost one of its 5’’ main guns and also its 21’’ torpedo launchers, but still retains an excellent rate of fire in her main guns as well as five dual 40mm Bofors cannons to take care of any smaller vessels and aircraft in particular. On top of this, Yūgure is also a premium vessel, meaning that captains are able to earn more rewards for all actions performed in combat - a trait most welcomed by new captains aspiring to quickly climb the ranks of the Japanese bluewater naval tree!

All captains will have the chance to commission Yūgure into their battle fleet by taking part in the upcoming crafting event, starting soon in War Thunder. Stay tuned and calm seas!

Commenting is no longer available for this news
Rules
ShimakazeChan
22

Kinda Disappointing Out Of All Japanese Vessels, An American Post-War Lendlease (And Not Even A Late Japanese Refit). Hopefully This Means It's Only A Premium Related Option So All Other Japanese Contenders Would See Tech Tree Use.

Yeah. Giving Japan copy paste DD seems odd. I know Japanese destroyer guns have issues but their tops are far and away the best in game. This just doesn't feel right.

Conte_Baracca, While I would love a unique ship, I'm happy because this is the first build a bear event vehicle ever for a minor nation and because Gaijin only wants stuff from or for the big 3, the way I see it is it's either a Fletcher for Japan or nothing for Japan. I would prefer a unique ship, but for what it's worth, I'm happy.

It isn't lend lease, it's purchased.

Lunatic242, It literally says its loaned by us navy to japan.

Lol, if anyone was getting a boat, it was gonna be japan. Lolz

People give the leaks a ton of doubt and rightfully so but they're the only option beyond data miners, random speculation, and "sTay TUned tO tHe nEwS!1!".

Kek what a disappointment, the 1934 original Yugure would have been way better than this

Way Better Is Kinda Of An Exaggeration. Totally Agree There's Better Options, But Alas. It's Gaijin.

I would take IJN Yūgure over Fletcher any day.

So it is missing some armaments but have you guys looked in the manual, maybe it is capable of carrying more guns and torpedoes.

Sorry Comrade. Only applies to Germany.

Definitely could. i mean the US manual clearly has it with those guns and torpedoes still on board!

Giving the third largest WW2 navy a copy-paste, because that makes SO much sense...

Would've been great if Japan got some actually Japanese destroyers, rather than second-hand American ones.

Why not kitakami XDD

Kanaria, Kitakami would be perfect premium/event ship, as long as she is added as torpedo cruiser.

That uninteresting vehicles for this event, it will be without me, saving time

' a trait most welcomed by new captains ' Yeah, because RP and SL gain in naval is atrocious.

It's like they are trying to kill the mode.

I greatly enjoy the Fletcher in Naval, looking forward to this if I can get it.

Historical loadout or loadout said in the manual? XD