This tank destroyer is mounted on a BMP-3 chassis, equipped with a radar, thermal imaging and extremely powerful missiles and capable of simultaneously firing two ATGM’s at two different targets!

Fun fact: the chief executive of the KB Mashinostroyeniya in Kolomna who supervised the development of the Khrizantema was a fantastic engineer with a really cool surname – Sergey Nepobedimy (translates as “Invincible” from Russian).

In the eighties, the KB Mashinostroyeniya in Kolomna began work on an all-weather anti-tank missile system capable of efficiently detecting and destroying ground armoured vehicles, helicopters and other units at any time of day and any visibility level.

The system was chosen to be mounted on the BMP-3 chassis – a highly mobile, all-terrain platform that could even navigate water. That is how the 9P157-2 Khrizantema came to be – it became a unique unit capable of simultaneously following targets on two separate channels – on its radar system and through visual contact.

Moreover, the abovementioned radar can detect and take aim at targets at any time of day and visibility level (be it night, smoke or sandstorm).

The system’s missiles are capable of penetrating tank ERA along with over another 1,000 mm of armour beneath it. The Khrizantema was put into service by the Russian army in 2004 and has since undergone modernisation several times. The missile system has also been exported abroad and deployed by other countries. 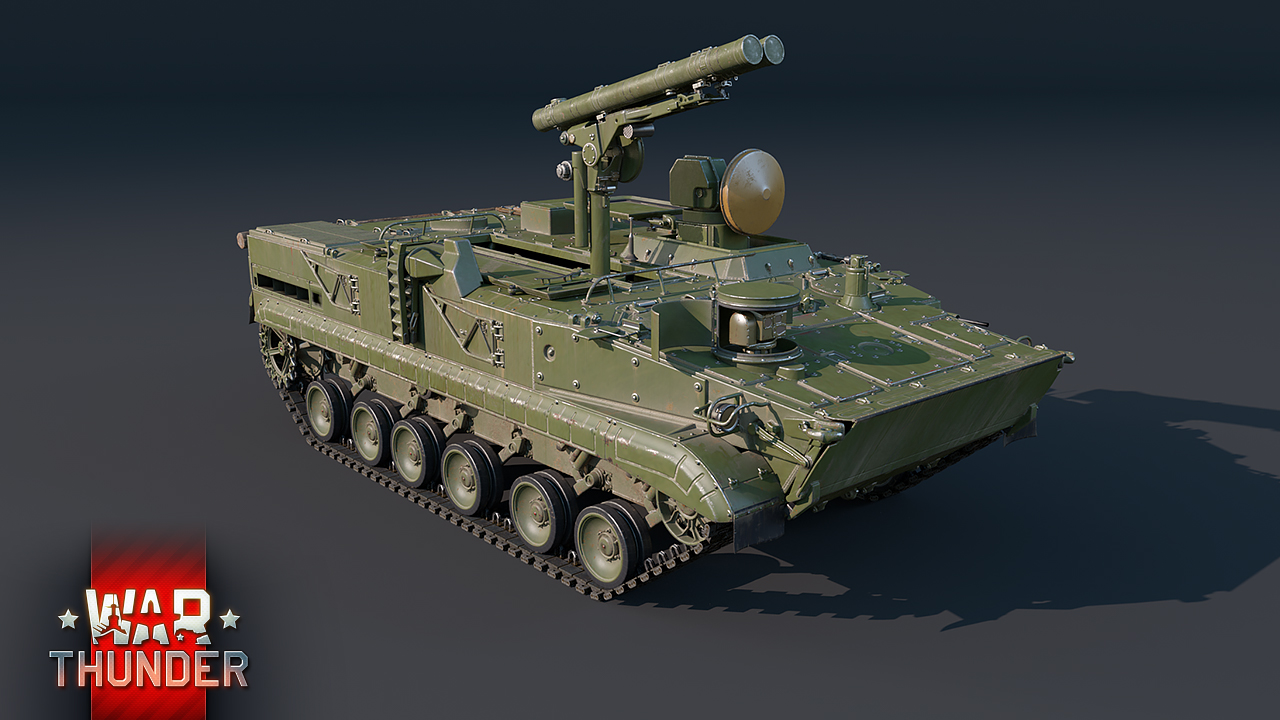 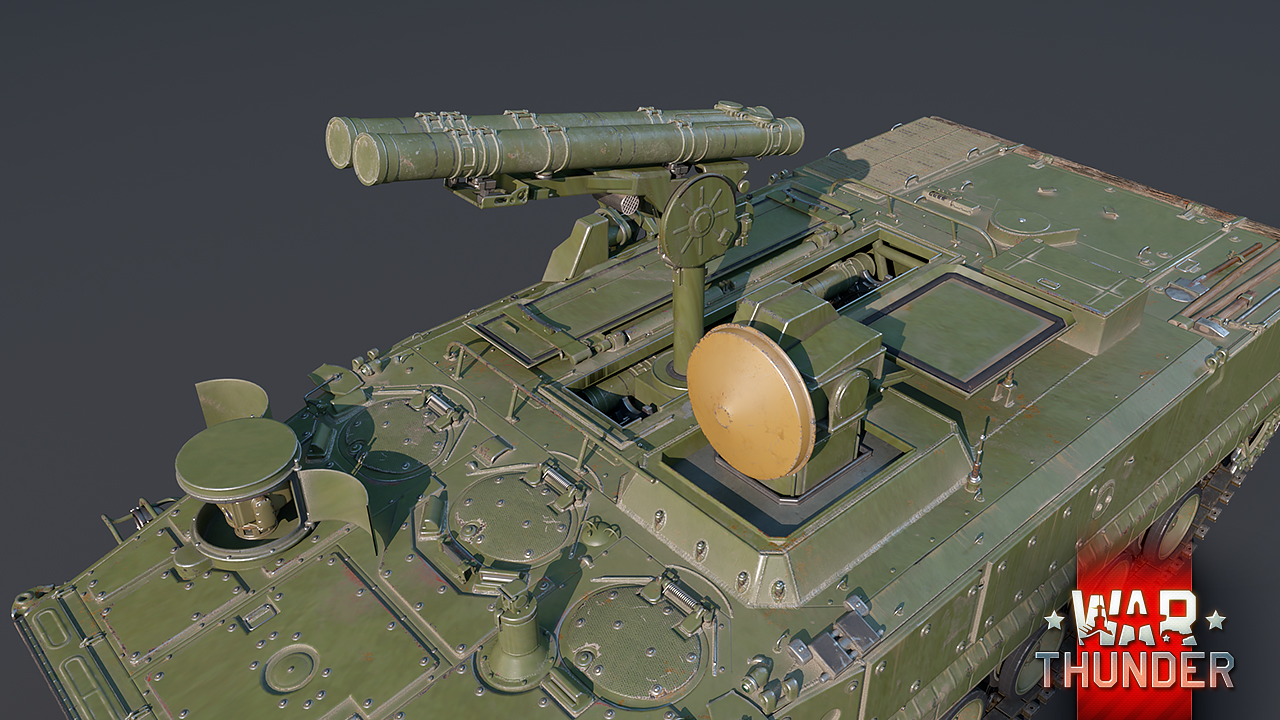 In our game, the 9P157-2 Khrizantema will become a top-ranked tank destroyer in the USSR tech tree. Powerful ATGMs geared with a dual guidance system that uses both radio signals and laser beams for tracking the target will serve as the unit’s base. Aiming through the commander’s or gunner’s crosshairs may be a feature every War Thunder tanker is very familiar with, but using the Khrizantema’s radar, on the other hand, will become a whole new experience for the players. What we essentially get is an all-purpose and practically faultless means of detecting and neutralizing enemy tanks even in minimal visibility, be they concealed behind a smokescreen or in the dark of the night. That’s practically the same as the aircraft equipped with a radar that detects enemy aircraft! The dual guidance system allows the player to launch two missiles at once – the target that the radar locks on to is hit automatically, while the second missile travels toward the enemy unit in the gunner’s crosshairs by following the path set by, as one would expect, the laser beam. In the game, the missiles are launched in sequence. The first projectile is controlled by the radar system, and should the necessity arise, you can fire an ATGM that you’ll have to guide manually using the crosshairs.

In addition to its one-of-a-kind guidance system, the Khrizantema also boasts excellent missiles.  Commanders will have a choice of two ATGM types – the former has a thermobaric warhead that equates to over 10 kg of TNT in power, while the latter is essentially a high-explosive dual-purpose projectile that can make short work of ERA. The dual-purpose projectile has truly impressive combat potential – it can penetrate a whopping 1,200 mm of armour hidden beneath the ERA! However, it’s important to remember that the Khrizantema has no specialized missiles with a proximity fuse for neutralizing airborne targets, so if you want to take down a helicopter with an ATGM, you’ll have to be really accurate.

The vehicle’s chassis comes from the BMP-3 that you’re familiar with, which has its pros and cons. Pros include great speed and all-terrain capabilities, as well as the ability to swim and shoot from the water. The light armour and low reversing speed comprise the cons. As far as everything else is concerned, tank commanders will find controlling the new ATGM carrier rather intuitive – stay away from the front lines, watch out for tank and automatic fire, switch positions as often as you can and... shoot! Shoot without restraint, shoot on target, shoot as much as your heart desires!

The Khrizantema will make you experience high-rank combat in ways you’ve never experienced before. For instance, picture the following scenario in your head: a missile controlled by a radio signal is flying towards a tank guarding a capture point and surrounded by a smokescreen, while you are guiding the second ATGM through your crosshairs right into its ally’s frontal hull. All in all, you need to research and test the Khrizantema in combat as soon as the opportunity presents itself. It’s a new high-rank ace up Russia’s/the USSR’s sleeve that is practically guaranteed to stay in your top setup for a long time. When will this unit become available? Once War Thunder: Starfighters major update is out, so very soon! See you later!

Commenting is no longer available for this news
Rules
Issie262
20

Please stop asking, because: 1. It will be mediocre at best when added 2. We don't really need it, as soviets already have a decent top tier line up 3. Devs already said it's not added this patch 4. There's only that much that can be added at a time 5. 1000 other people already asked for it 5. It makes you look desperate like that Dozer guy Unless of course you're talking about WWII AA, in which case, please add.

RuskiExMachina, It wont be mediocre dude. T90/T90A will be using more modern APFSD and overall better armor than T80U or T80B plus its not going to scream at anyone with the Turbine engine "HEY YOOOOOO IM HERE BROOOOOOOO". T90 is the right direction for Russia at the moment since they're desperately needing a newer modern mbt compare to other nations. The nations that are in need of more mbts at 10.3 from the most to least are followed: France, Russia Japan.

Plz gib Willies Jeep with 12.7mm AA on the back

because yes it still felt like ww2 era with thermals, NVD, stab, ERA armor, apfsds/heatfs rounds, modern helis, jets and the vast amount of other modern tech we see ingame.

WT_CT_Center, i mean they had stab in ww2... maybe early development thermal and nvd....

Not sure what game you have been playing if that's your opinion...since you are not playing War Thunder whatsoever.

smaddeus, I have registered 1692 hours in War Thunder, i am pretty sure i am playing War Thunder xD

Blue_Shark0, im sorry but when did i ask you?

stop scaring the t90 away! it's anxious to be introduced at the moment :((

Another useless vehicle for the USSR

Another useless comment that is not constructive at all.

No such thing as useless vehicles in this game. It's about the skill and maybe luck of its operator. Anyway, if they added an OP vehicle to soviet branch people would be complaining about it being too good. There's no way to win for the devs, is there...

Kill it, then once more with feeling.

Your comments are actually insufferable. Why people are still liking them is beyond me. People complaining about your spamming is not "trolling" and are not "threats", please grow up.

Russian__Comrade, I think you need to follow your own advice.

Will I get trolled by the same people every devblog comment? Yes or No?

Captured Leopard 3A9V+ for Russia, when?

Seems like you have never played the Shurm S. It love it and when played correctly it is an amazing vehicle.

Well there is such thing like enemy tracking. Let's say that you could lock ground unit, launch ATGM at simultaneously launch another ATGM that will kill another enemy. Not that useless. And ATGM's are far higher than on Shturm-S.

Tovarish_Bear, Higher as what? damage? distance? penetration? what higher? lol

To be honest, ATGM carrier in this game is already obsolete/useless for ground-to-ground combat. But I understand you and I agree that some other nations deserves such vehicles for the ones who likes to play with them (and they really should stop adding stuff that is definitely not needed/necessary at the moment, like this Khrizantema)

Not this update, sorry for you dude, hope that you will be able to wait

Gaijin, I'm really not that "T-90/Mirage when??" guy, but I would like to know why we don't have planes like MiG-17F and MiG-19S for its mother nation. I mean, I'm not even asking for new stuff since both of them are already present in the game (MiG-17F in form of the North Korean F-5). And one more thing.... do you have plans to rework/divide MM for Taiwan/China and GDR/East Germany? Or it'll be this current meta meta of every nation has every vehicle and mixed battle forever?

If so, get rid of the Tech Tree system because it already failed hard. And talking about China/Germany... there's no reason to play anything else in the game, since they have and WILL HAVE the best vehicles of the best nations combined

IlustriousKnown, Yeah, Germany is just getting the best of everything. Why grind America when Germany has the best Cl13s, and soon to be F4, F86K and F104. Why grind Italy when they get the G91R3, and R4 next patch, why grind Russia when they get the Mig19 and best Mig21. Why waste time on others when one nation has it all. China is going down that path too, it already has but it's current vehicles kinda suck so its alright for now

Yea and nobody said a thing when the UK player base one day after receiving their F4 mach 2 were already asking for another mach 2 with the EEL... But a nation with nothing can't ask for things right? lul.

MichouGaijin, When people play the UK tree, they dont play it because they want the best vehicles, because they simply wont get that in most places. They play it to play British/Commonwealth vehicles. When the F4 got added, it was nice because the UK finally had a supersonic but people wanted the EE Lightning because it would be the first British supersonic.