We are happy to reveal that in the upcoming War Thunder major update we plan to introduce the Italian navy to the game! We look forward to introducing these naval beauties and telling you about many of them in our upcoming Devblog articles, so keep an eye on the news!

Today we want to present one of the vessels that will be introduced as part of the Italian naval research tree - the torpedo boat MS-15.

In the early years of WWII, the Italian Navy realized the drawbacks of the MAS series of torpedo boats. Namely, the vessels of this type boasted excellent speeds, but had less than ideal seaworthiness. As a result, the Regia Marina began looking into procuring a vessel that would address this problem in the early 1940’s.

The answer quickly came with the fall of Yugoslavia and the subsequent seizure of their limited naval force by the Italians. Having found older German-built Schnellboots of the Lürssen type, the Italians soon came to the conclusion that these vessels ideally fitted the current needs of the navy. As such, the captured examples were taken back to Italy and a nigh identical design was derived from them by the shipbuilder CRDA. The design, designated CRDA 60t, only differed in the powerplant choice as well as featuring Italian weaponry, while the rest remained virtually identical to the original.

The first of the CRDA 60t torpedo boats were completed by April of 1942, of which a total of 36 would be built. The CRDA 60t torpedo boats first saw action during WW2 in summer of the same year. One of the most notable successes of their early service career was the fatal injuring of the British light cruiser HMS Manchester, followed by sinking by British ships, caused by MS 16 and MS 22 in August of 1942, also marking the largest target to be destroyed by any motor torpedo boat during WWII.

Some vessels of the type also served with the Kriegsmarine, particularly those which were captured by the Germans following the signing of the armistice in September of  1943. Of the 36 CRDA 60t torpedo boats, 16 were lost in action during the war. Many surviving units continued serving with the Italian Navy postwar and well into the Cold War, thanks to modernization programs. A handful of the surviving units were also handed over to the French and Soviet Navies respectively under the armistice treaty conditions. The last of the highly modernized CRDA 60t torpedo boats was decommissioned as late as 1979, marking the end of a 37-year service career. 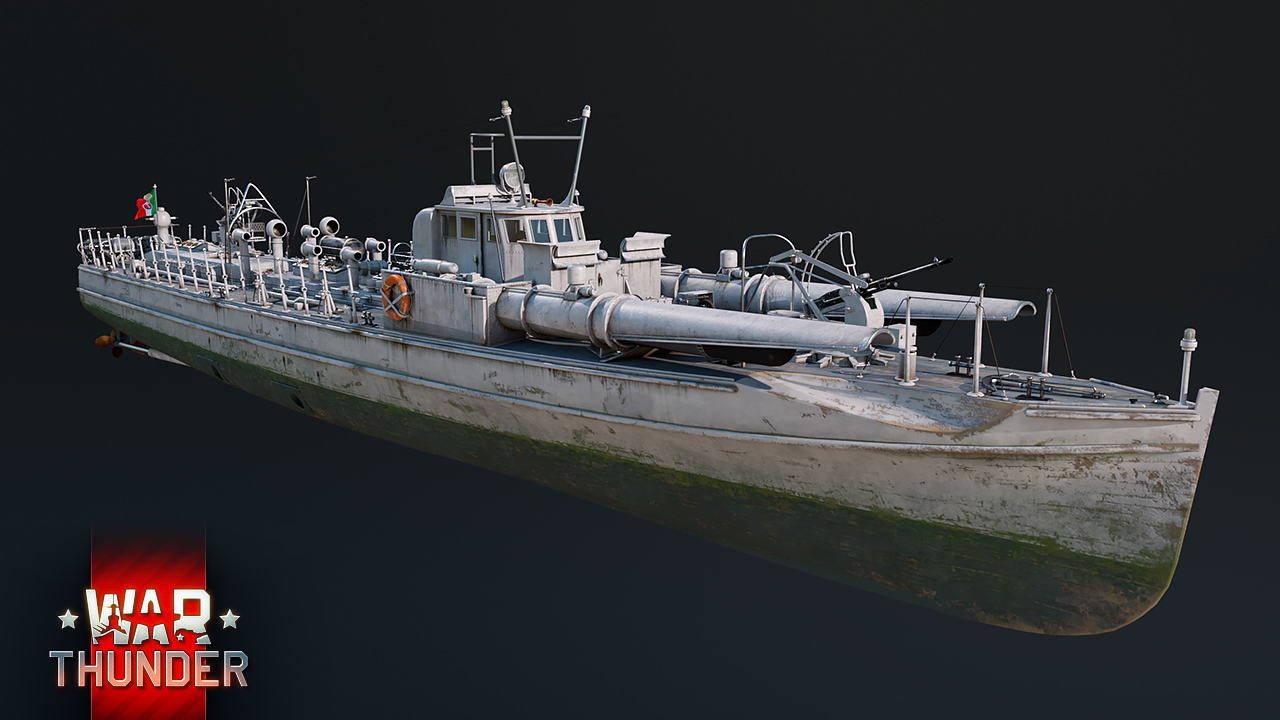 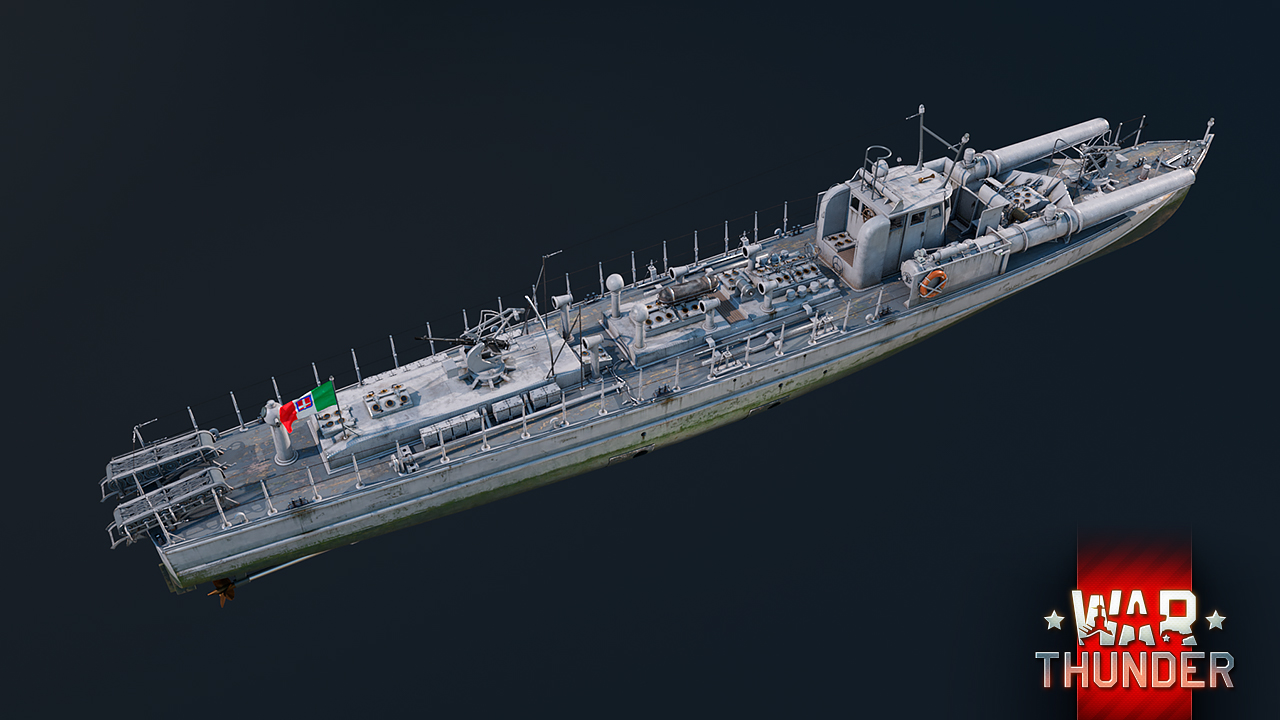 In War Thunder, the CRDA 60t-class of Italian motor torpedo boats will be represented by several units. One of those is the MS-15 1a, a vessel of the first production series of the class. Together with many other unique Italian vessels of the mosquito fleet, the MS-15 will form the backbone of the early ranks in the brand new Italian naval tree, coming to War Thunder with upcoming update.

Offering a balanced combination of good seaworthiness and decent firepower, the MS-15 1a will be a perfect choice for captains ready to get their feet wet with the upcoming Italian naval forces. The MS-15 1a features a reasonable top speed of 33 knots (61 km/h), thanks to the power provided by three 1,150 horsepower petrol engines, generating a combined power output of 3,450 horsepower. Although it won’t win any races when pitted against some of its contenders at the early ranks, the MS-15 1a instead promises its captains excellent agility, which when coupled with the vessel’s relatively small silhouette, makes for quite the difficult target to hit at times.

Fun Fact: The CRDA 60t torpedo boats’ most famous exploit is the lethal damaging of the British light cruiser HMS Manchester in August 1942, making it the largest surface vessel destroyed by a torpedo boat in WWII.

Speaking of hitting targets, the MS-15 is equipped with a pair of single Breda 20mm cannon mounts on either end of the ship’s hull. Alas, its shells are generally weaker compared to other nation’s 20mm, and 12 round clips. Nonetheless, these will form the vessel’s primary weapons for dealing with other light vessels as well as any low flying aircraft. Last, but certainly not least, the MS-15 also has access to two 533mm torpedo launchers, mounted on the vessel’s bow - similarly to German S-boots. Torpedoes are definitely this boat’s ace in the hole, able to hit even larger targets ideally between 3 and 12 kilometres distance (depending on the modifications researched).

However, as with many vessels of the early ranks in War Thunder naval forces, the MS-15 also only has a small crew complement consisting of just 19 sailors. As a result, the vessel is relatively fragile and cannot survive sustained fire from opponents in a heated firefight, giving the use of mobility paramount importance.

Commenting is no longer available for this news
Rules
BlackFlagger
47

Really nice to see the italian navy is coming to the game finally, can't wait for the sexier ships like destroyers and cruisers. Cheers!

Oh you're in for a treat then mate - Stay tuned to the news, more to come!

Conte_Baracca, San Giorgio is in no way better than Graf Spee. It is much older, slower, has smaller and worse guns, and has less guns than a Graf Spee. In what way would this be good against a Graf Spee?

Long expected. Rejoice for it is finally here.

Every time someone asks, it runs away for another patch. You guys are scaring it too much.

Yeah, Comrades, When the T90 Will Be Released?

AbdullahKebab, T-90 will be redundant when it gets added, at least the T-90A will. We might could get that put between the T-80B and T-80U or after the T-72B.

Were is my TOG

Of course ... the first thing a WT player thinks about is: More stuff - when?

Where is my TOG

Ok. Are we getting the Mirage this Update? Yes or NO? Please

We really hope so.

Ouiche, Thank you, I hope so too. Then I can stop asking.

Nice to see the Italian navy coming to War Thunder. More WWII vehicles are always welcome. However gaijin could you address the issue of naval rewards being too small? Rank 1 boats take the same time to research a rank 3 plane.

Ranks in naval don't directly translate like they do for other game modes. The ranks split ship classifications. T1 is river/armored motor boats, T2 is more PT boat/sub-chasers, T3 is destroyers, T4 Light cruisers, T5 Heavy cruisers. Within a tier you can have a large range of brs so saying T1 naval should be the same as T1 planes is silly. T1 naval in effect can cover the equivalent of up to BR 4+ planes (5.7 being the max in naval instead of 10.3)

Alexsis8, Regardless of how its split, it still takes as much time for a 1.7 boat as it does for a 5.3 tank

Not like it matters. It's gonna be far worse than the T-80U, so don't cry when you get dunked on by literally everything.

blbobobo, The Armor is better, and the gun with the shell is better too...

Sckod, You don't need anything. You want planes and other people want other things, let them have their opinions