M18 Gun Motor Carriage – Hellcat
21 June 2016 Profile
Attention! This news was published on the old version of the website. There may be some problems with news display in specific browser versions. 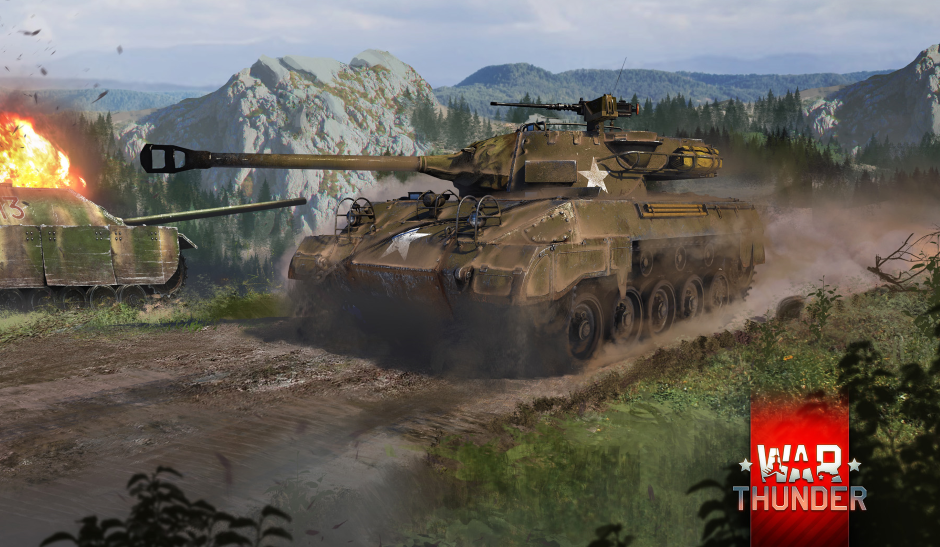 Go light, go quick, don’t stop - these words pretty much sum up the M18 Hellcat, American tier III tank destroyer with the BR value of 5.0. And while the gun is rather mediocre, and armour is nonexistent, one trait makes the Hellcat one of the potentially most dangerous tanks on the battlefield: its speed.

If you just bought the M18 Hellcat you are probably well accustomed to its predecessor, the M10 Gun Motor Carriage. The M10 may have a good gun for its BR, but it’s rather slow, armour is thin and the hand-cranked turret traverse is a painful disadvantage. Its speed was not enough to keep up with the US tank destroyer doctrine, which demanded tank destroyers to be as fast as possible, allowing them to quickly respond to enemy armoured breakthroughs by moving in and eliminating the armoured thrust. The US Army thus required a faster and lighter vehicle. The development then resulted in the T70 prototype. It was armed by the 76mm M1 gun, originally developed for the Sherman medium tank, but its main trait was the speed - the prototype was able to reach up to 57 mph (92 kph) road speed, making it easily the fastest tracked vehicle of the entire war, and one of the fastest tracked vehicles ever created.

Serial vehicles, designated as the M18 GMC and produced from the mid-1943, had their speed capped to “only” 45 mph (72 kph), but the vehicle was still extremely fast with great power-to-weight ratio, as the Continental R-975-C4 air-cooled radial engine, producing 400 horsepower, had to propel only a little above 17 tonnes. You will notice this advantage almost immediately - the Hellcat accelerates fast, goes fast and turns fast, and feels more like a light tank than a tank destroyer. The famous 45 mph (72 kph) top speed is achievable only on roads though, as off road, the top speed is 28-31 mph (45-50 kph). It’s still a good performance however, which will give you a very high degree of mobility. It was this mobility which was the main selling point of the Hellcat in real life. Hellcat crews quickly learned how to use the speed of their machines to race into enemy flanks and surprise German armour from the side. In the game, the speed makes the Hellcat one of the best control zone capturers, able to race ahead and occupy the control zone way before enemy team will even get into range. As the vehicle is very light and has a powerful engine, it can easily climb hills and obstacles, and if you know map layout well, you can find and reach positions unreachable by other tanks, such as the castle on the Mozdok map, or map edges of the Kuban map. This means, if the player is daring and cunning enough, he can find a great positions for taking flank shots on unsuspecting enemy tanks. 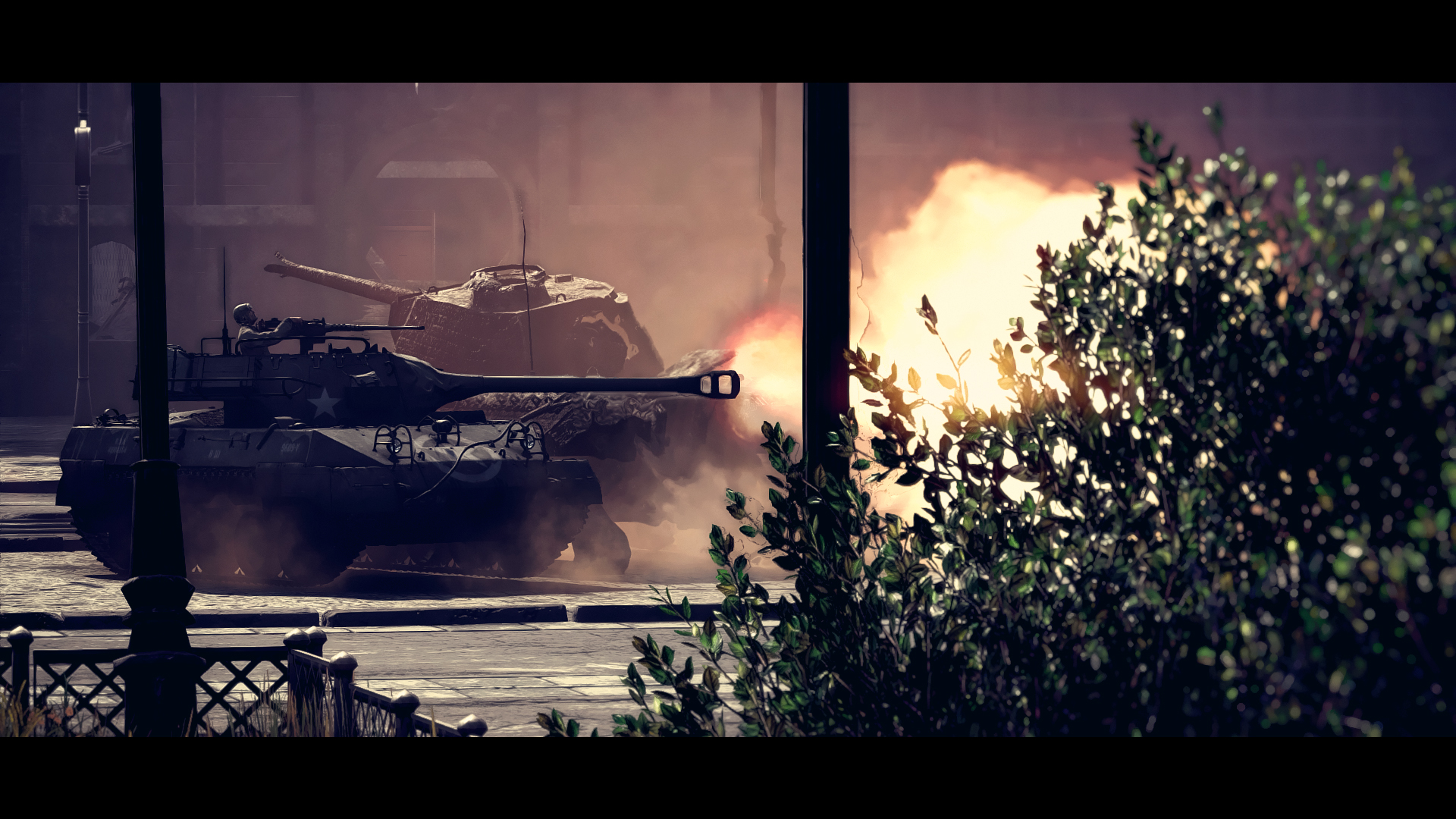 The anti-tank doctrine established by the US military called for fast, powerful vehicles
able to stop the German blitzkrieg tactics by ambushing the attacking tank forces.

Speaking of shooting - as was mentioned, the Hellcat is armed with the M1 76 mm gun, the same as on 76 mm armed Sherman medium tanks. In the game, the default AP ammunition will allow you to pierce up to 155 mm of armour up close, and up to 88 mm of armour at the range of 1500 meters - while this indeed sounds good, the M79 AP round is a solid shot only (thus lacking the bursting charge, resulting in lower post-penetration effect) and has rather poor performance against sloped or angled armour. The improved M61 APCBC round has a lower penetration, 127 mm at best, but has much better performance against sloped armour, better retains its penetration over distance, and has an explosive filling, allowing it to cripple or destroy enemy tanks much faster. The highest penetration is provided by the M93 APCR round, which is able to penetrate up to 221 mm of armour at the point blank range, and 124 mm at the range of 2 kilometers, but has only a low post-penetration effect and has poor performance against sloped or angled targets. In real life, such performance was effective against most common German vehicles such as the PzKpfw IV medium tank or the StuG III self-propelled gun, but struggled against frontal armour of the Tiger heavy tank or the Panther medium tank at all but closer ranges, as regular rounds were often able to pierce the Tiger or the Panther only at closer range, and APCR rounds were in a short supply. 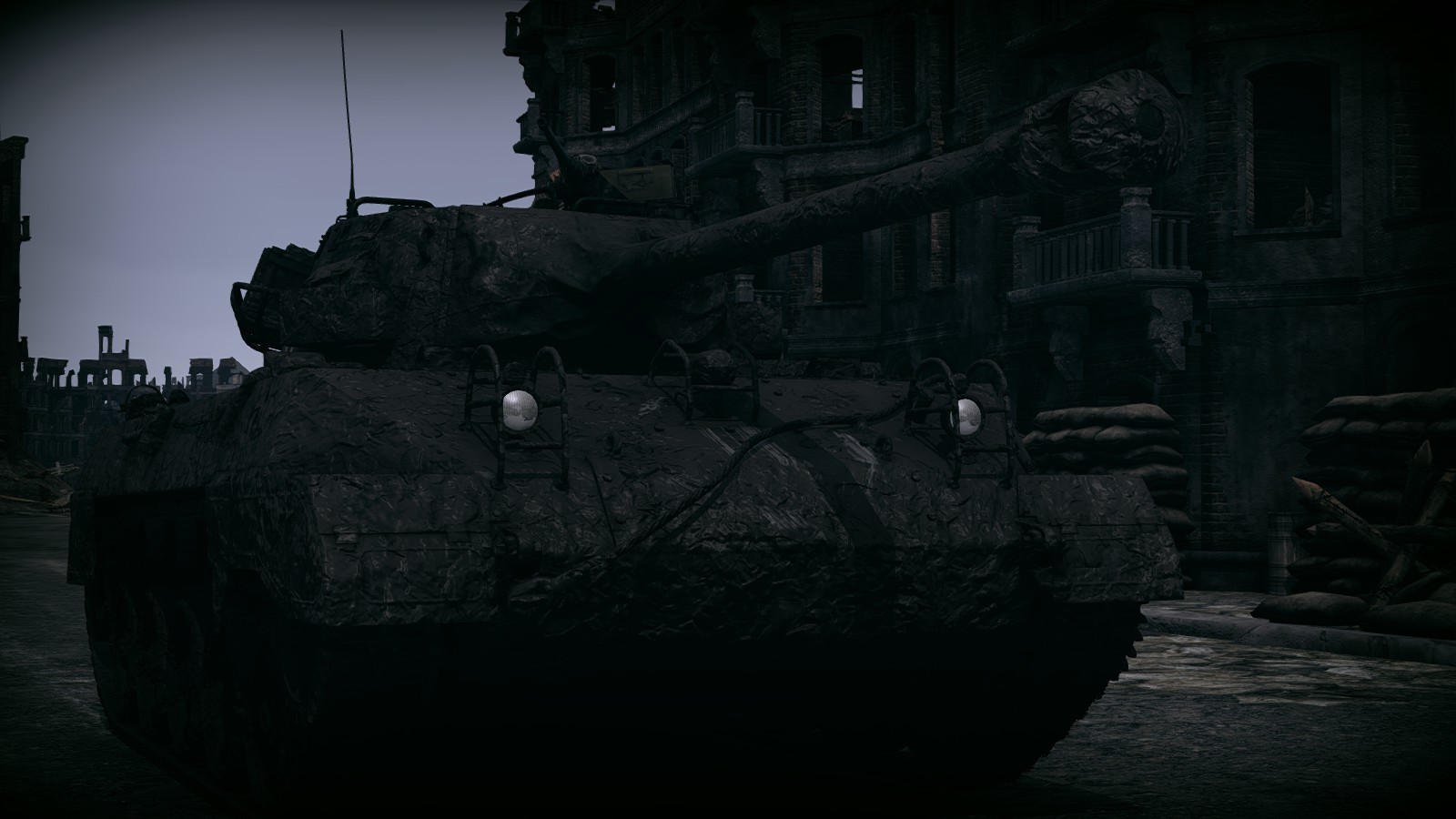 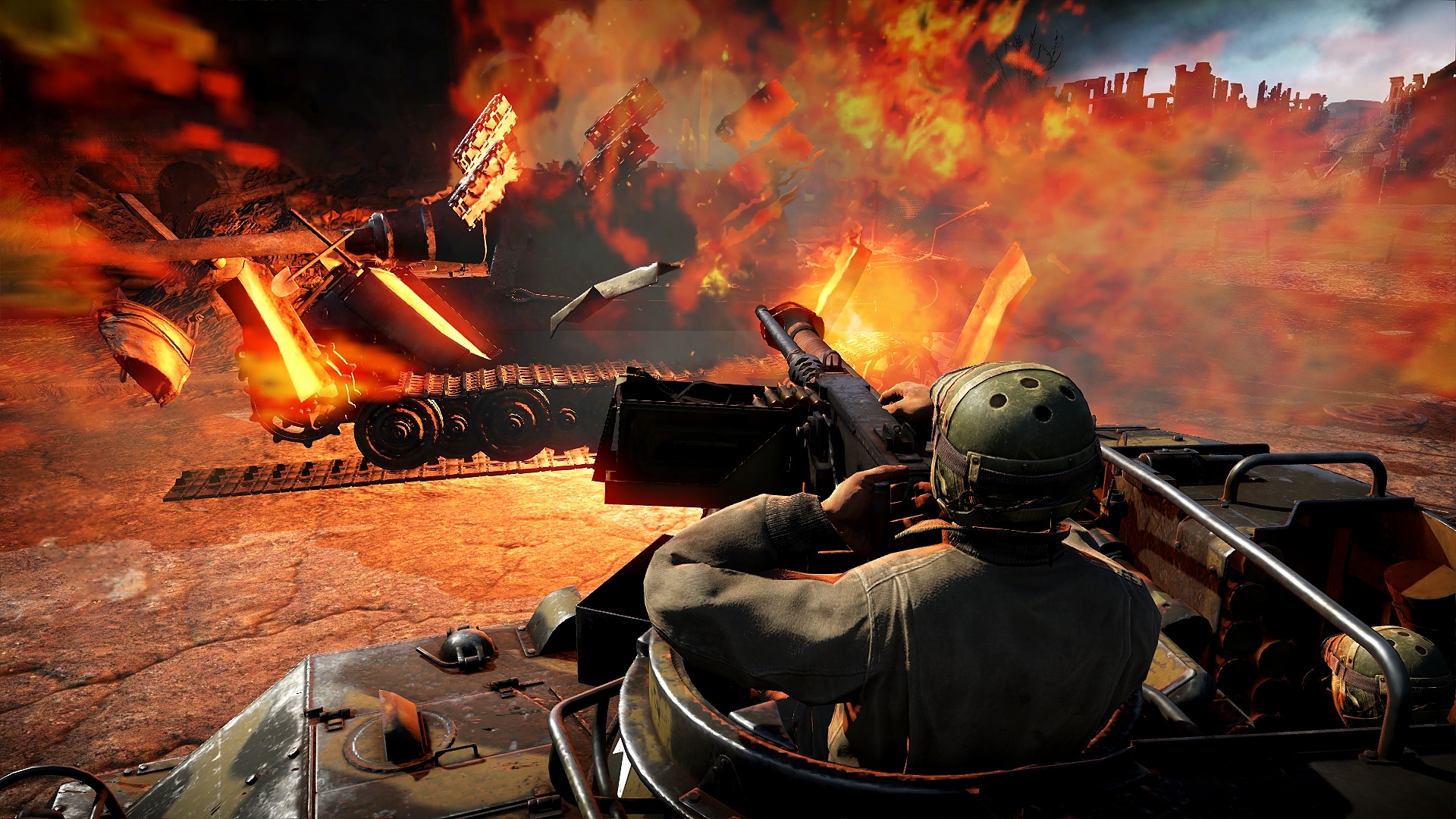 In the game, this disadvantage will affect you as well, as you can meet both tanks such as the PzKpfw IV or the T-34, both of these being easily penetrated even at range, and the Tiger, Panther or even IS-2 tanks, which have enough armour to be able to easily bounce off your shots at longer range. That’s where you will fully utilize the mobility of the Hellcat, as no tank on given BR range is safe against a strike from the side, and a flanked enemy is a perfect target. As other American tank destroyers, the Hellcat has a turret, removing the usual limitation of other casemate-style destroyers, and compared to the M10 the turret traverse speed is much faster due to the turret drive being powered, improving your reaction time. Additionally, the Hellcat is armed by a single flexible M2 .50 calibre machine gun, manned by the commander. This weapon is suitable not only against enemy low-flying aircraft, but against unarmoured opponents as well - the downside is exposure of the commander, as his whole upper torso is uncovered and highly vulnerable to fragments and machine gun rounds.

The mobility is not only important for the Hellcat - it’s downright vital for its survival. The requirement of high speed and low weight could be met only by reducing the armour protection to nearly zero. As a result, the Hellcat’s armour is only 0.5 inches (12.7 mm) thick all around the hull, with the strongest, 1 inch (25.4 mm) thick armour located on the turret front and covered by another additional ¾ inch (19 mm) plate on the mantlet, bringing the mantlet thickness to 1 ¾ inches (44.4 mm). The survivability of the Hellcat is thus extremely low, as even large-calibre machine guns can easily pierce your paper-thin armour from the front. HE shells are absolutely lethal not because of nonexistent armour, but because of the open-topped turret, exposing the crew to fragments and aerial strafing. It is thus crucial to avoid being hit altogether, especially by self-propelled anti-aircraft vehicles, as these can rip your Hellcat apart in a heartbeat.

In real life, the Hellcat was valued most for its ability to quickly zoom around the battlefield and relocate to wherever it was needed. Use this method in the game as well - utilize your acceleration and speed to quickly find a favourable position and aim for flank shots. When spotted, immediately retreat and relocate, as you simply cannot take any damage. When playing on open maps such as Mozdok or Kursk, use the terrain for cover as much as possible, and drive quickly to the enemy flank when playing the Battle mode, or to cap zones when playing the Domination or the Break mode. When playing close-quarters map such as the Advance to the Rhine, your situational awareness is crucial - avoid chokepoints and instead try to use side alleys to circumvent the enemy and attack the rear or cap enemy zone. The knowledge of terrain is then very important on all maps. Learn your flanking routes, search for good ambush positions and for ways to retreat if needed. That means the Hellcat requires a very cautious tactical approach, which is difficult to get grip of, but highly satisfying when mastered. Engagements are made easier by a solid reload time of 6.1 seconds with fully trained and specialized loader, giving the tank rate of fire of roughly ten rounds per minute  But when things go wrong and you find yourself head-on to enemy tank, you can still save yourself - use your acceleration and agility to circle the enemy vehicle and pump shells into side armour. 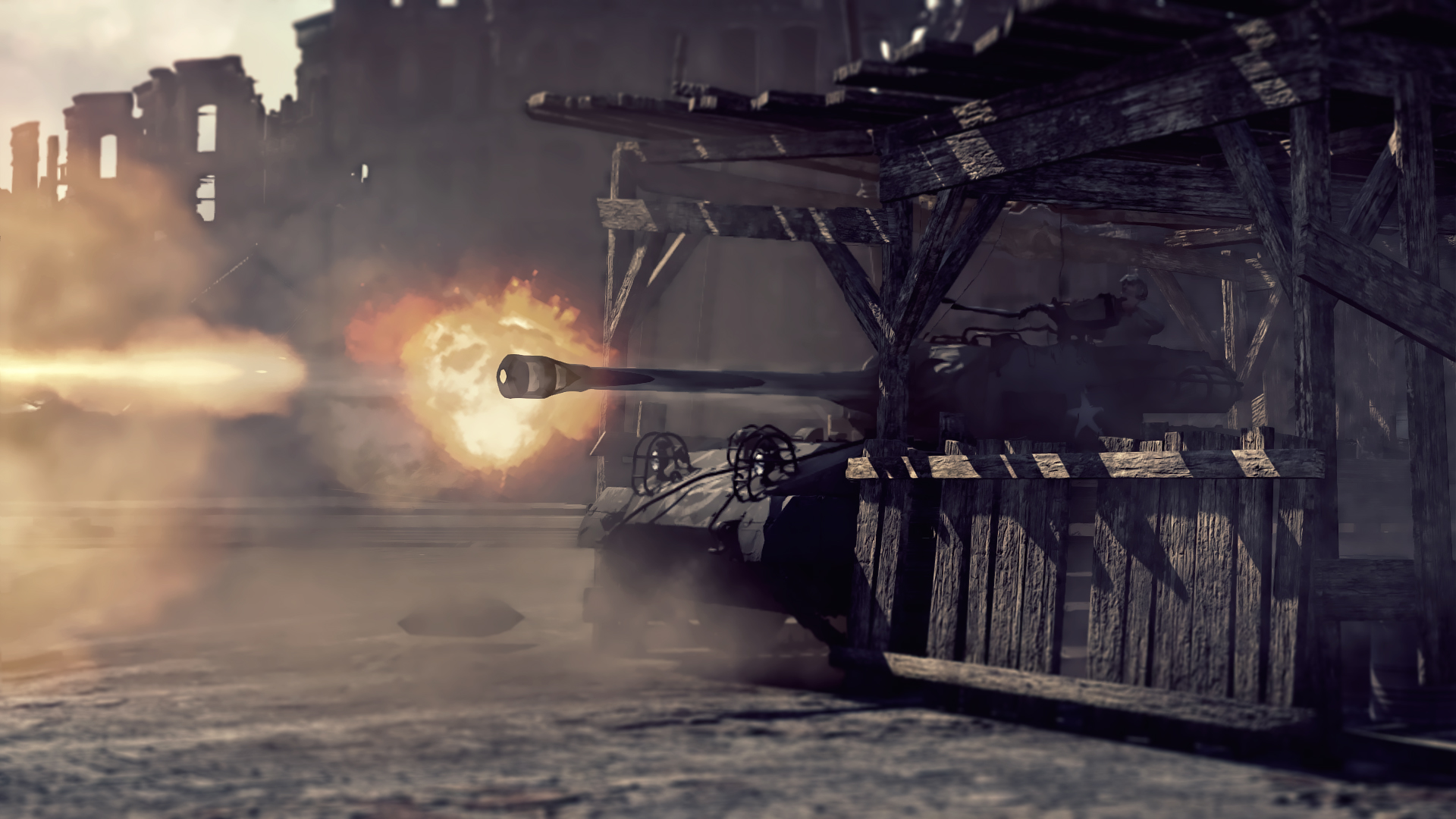 In real life, the Hellcat was a very successful vehicle, which was also utilized as a light assault gun both during World War Two and the Korean War. Between 1943 and 1944, about 2500 Hellcats were made. In the game, the Hellcat gameplay can be a lot of fun, as you can move around the battlefield as a sneaky fast assassin, striking your opponents from the side or from the rear, pursuing enemy light tanks, or outmaneuvering opponents at knife-fight range. It’s not exactly the easiest vehicle to get used to, but in the right hands the Hellcat can be a real game changer. And if you fall in love with the Hellkitty you can have not just one, but three of them, as you can purchase not only the default M18, but also the premium M18 “Black Cat”, which is nearly identical to the regular M18, but boasts a hefty bonus to SL & RP income and unique decals, and the Super Hellcat, which retains the speed of a regular Hellcat but is armed by powerful 90mm gun. The 90mm gun is also the armament of the M36 Jackson, which is the next American tank destroyer in the line after the Hellcat.

Commenting is no longer available for this news
Rules
Anonimo_LLopi
6

Too bad the totally not op t-34-85 has almost the same speed, better armour with almost 50% ricochet chance on the 45mm slope and a gun with 3 times more explosive and a bit more of penetration at close ranges. All that improvement with just 0.3+ br

Hover, the m18 does have better agility, gun depression which can help in most cases, in addition to an apcr round that is terrific for sniping

no cons? dude, you ever played it?

HardeKern, Only real cons are slow reload and no armour. But if you are relying on armour in the hellcat then ayy lmao

You forgot to mention that its rate of fire is nerfed to aimed shot time. And also, I'm yet to see that thing go past 64 kmph in AB even on sloped asphalt roads. I have hellcat spaded and all camouflages unlocked.

I easily slip past 72km/h on roads. Tell your driver to push it to its limits and don't be afraid to go a little fast! :P

Mediocre gun? That is definitely untrue.

Thanks for this! :D