The T-34 mod. 1940
13 November 2014 Vehicle Profile
Attention! This news was published on the old version of the website. There may be some problems with news display in specific browser versions. 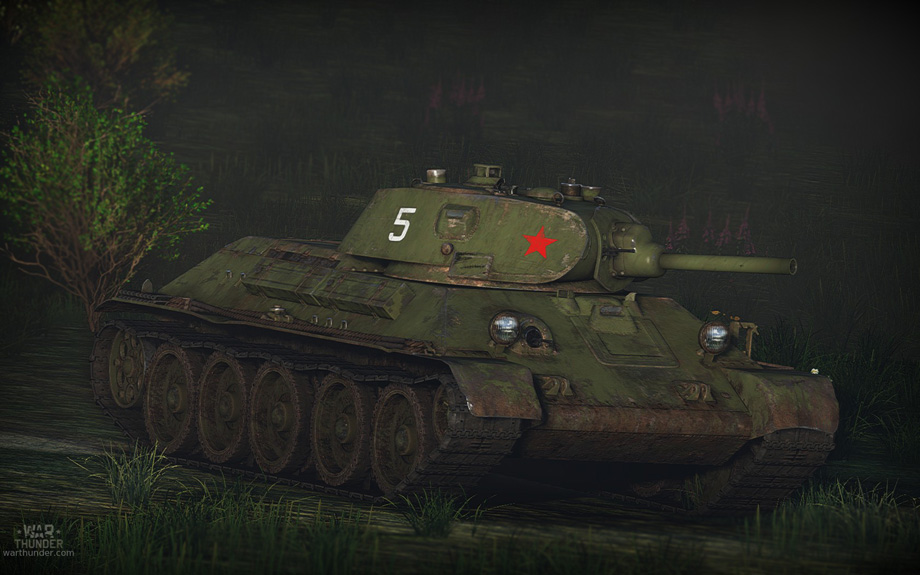 While looking for a new tank concept, the Red Army looked towards engineer Mikhail Ilyich Koshkin, that studied engineering, and now was to develop the T-34 as chief designer. Along with him was Aleksandr Aleksandrovich Morozov, a colleague in engineering as well as in tank designing. The Kharkiv Locomotive Factory of Kharkiv, Ukraine, was the birthplace of this famous WWII tank design.

Koshkin went to work on the new type of tank, with the first prototype named A-20. It utilized research from the BT-IS and BT-SW-2 projects, which both featured sloped armour. Koshkin convinced Stalin of his project and received authorization for the construction of a second prototype, called A-32 - with the 32 representing the thickness of the frontal armor, similar to the A-20. Both were tested at Kubinka in 1939 employing a V-2-34 Diesel engine. Still not satisfied with the armour and armament capabilities, a much heavier design of the A-32 was approved: It featured wider tracks, so it would not get bogged down in less favourable weather conditions, and was equipped with the improved 76 mm L-11 cannon. Koshkin named this new and approved tank the “T-34” after the year he first started to develop the ideas for the tank.

The German invasion of the USSR, “Operation Barbarossa”, became the baptism of fire for the T-34 and the German Wehrmacht was shocked when this new Russian tank arrived in battle. However, the USSR still suffered massive losses of T-34 during the early stages of the war, which can primarily be attributed to crews that were poorly trained with the new machine and the serious lack of radio equipment to pass orders and report changing situations during combat. Other T-34 were lost to mechanical failure mostly due to wrong handling by their drivers, with the losses to actual German gunfire being much less significant.

In War Thunder, the T-34 mod. 1940 with L-11 cannon features great speed and agility, together with a good turret traverse and reload speed. It is best used in groups employing flanking maneuvers and focussing on the impressive speed of the vehicle to catch players off-guard. The sloped armor helps making it savely through the flanks on high speed even if noticed, as poorly aimed enemy shells are often deflected. Armour protection from the front in general is quite good, giving the T-34 the ability to also face standoffs with early German tanks quite well, especially if angled properly.

The L-11 gun has four types of shells to choose from. The most commonly used shell, the BR-350A, features an average penetration of 72 mm on 100 meters and comes equipped with an explosive filler, guaranteeing an additional damage effect after penetration. That makes it the most versatile of all projectiles the vehicle has to offer, as both penetration and potential lethality are well balanced. The BR-350SP shell, as an alternative, offers slightly higher penetration of 76 mm on 100 meters, while lacking an explosive filler and thus relying entirely on its kinetic energy to deal damage.

For high explosive shells, the T-34 mod. 1940 can access the OF-350M HE shell to combat unarmoured targets and emplacements as well as the Sh-354T shrapnel shell which, albeit often overlooked, offers a powerful tool to combat lightly armored vehicles. With an average penetration of 32 mm at 100 meters the shell is too weak to penetrate most frontal armours, but can be devastating when used either against light tanks or the weakly armoured sides and backs of many medium tanks. An experienced tanker will be able to make good use of its characteristics, especially when playing the T-34 mod. 1940 to its strength.

One of the major drawbacks of the T-34 mod. 1940 is the cramped interior. If an opposing player does penetrate your frontal or side armour, there is a high risk of your entire crew being knocked out resulting in the tank being combat ineffective. Thus, always try to be on the move with this medium tank, as it’s well sloped armour will work best at angles. Put your enemies under pressure with determined flanking attacks and lead them to take panic shots at your vehicle while on the move - and then finish them off.

Even though this new tank was a success on the battlefield, the original chief designer did not get to see it in action. After contracting pneumonia while driving prototypes of T-34 tank, Koshkin died in 1940.