We continue to publish a series of diaries with Max Lachmann about recording the authentic sounds of real military vehicles for War Thunder. In this entry, Max explains his instructions to record sounds from the “Griffon” engine of a Spitfire. This led him to a museum in Los Angeles, where he was able to find what he needed.

Just as I thought we were done, having just delivered a hard drive with nine rare tanks recorded in France, Pavel came back to me with another request: a Spitfire with a Griffon engine. At this point I didn´t realise that it would turn out to be more tricky than it initially appeared. After all, there are plenty of old Spits around, at least it seemed so when compared to Lancasters and Bf 109s, so I couldn’t see why it should be very hard to find one, not that it would have stopped me from trying anyway. 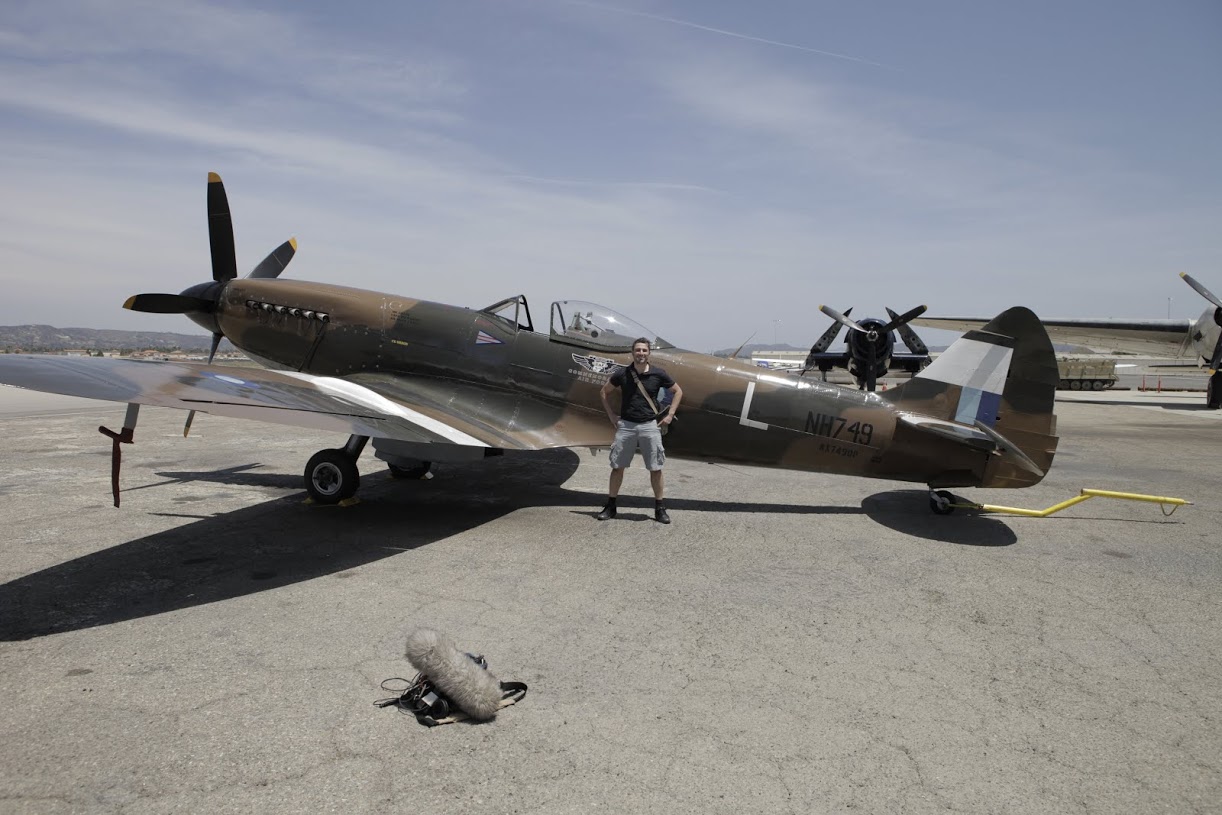 As always, I started to work my connections by email, also Googling all the different Spitfire models that had Griffon engines and to see if there were any survivors. Funnily enough, I found quite a few lists of surviving and restored Spitfires, but very few held any information on what engines were used to run them. It was also difficult to tell which were flying and which weren’t, but after a few days I got some replies to my emails. The first one was a lead in the UK, which would have been very convenient, but it turned out it was an aircraft that was being restored with an unknown finishing date, but expected to be sometime during the summer of 2014. They were very accommodating, but also understood that the timeframe was a bit too vague to work out for us. Our next lead was in the UK as well, but they had a busy schedule, and invited us to come and work around that. Knowing how complex the kind of recordings we do are, I knew that I had to find another alternative. Then, luckily, I got in touch with Jason Somes of the SoCal Wing at the Commemorative Air Force Museum in Camarillo, Los Angeles. They had an airworthy Spitfire with a Griffon engine, and were willing to help! As an added bonus, they also had an airworthy Bearcat and a C-46 that we could potentially do ground runs with.

Now we entered the next phase in the planning process. We had to agree on a budget, find dates that worked for both them and us, making sure one of the Blom Brothers camera guys were available for those dates, make reservations for flights, hotels, rental cars and so on. And, having learned our lesson, we know that recording aircraft requires lots and lots of cables, microphone stands and sandbags to keep everything in place when the prop wash hits them. Since all the equipment is considerably heavy, we figured it would be best to rent it on location. So after dealing with rental companies, travel agencies, the museum etc, we were finally all set. 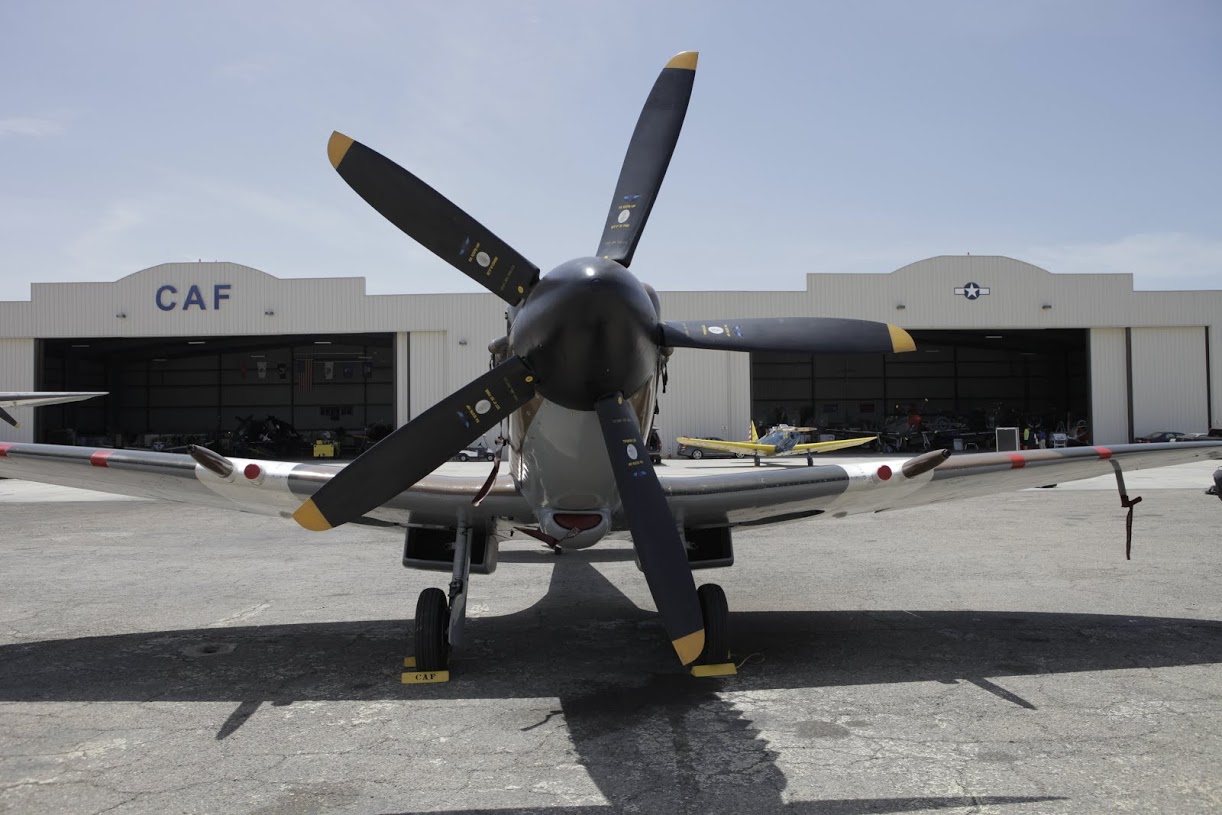 On the 8th of May, we boarded our flight to Los Angeles. We arrived late in the evening after changing flight in London. Changing to a transfer flight is always a risk, as it means that our luggage has to change planes too, something that is entirely out of our control. Having learnt the hard way that luggage can get lost and delayed, we always make sure to have one complete rig, with recorders and microphones, in our carry on luggage, so as to make sure we can at least record ‘something’ if our equipment goes elsewhere. Luckily the airliner we use allows 23kgs of carry-on luggage, which allows us to take quite a lot with us. Unfortunately it also means we always raise some interest at the security checks with all our odd looking machines and attributes. This time everything ran smooth during the check, and both us and the luggage came to the right place in time. We then got our rental car and drove the hour up to Camarillo and our hotel. At the hotel we received the first part of the rental equipment, two recorders, that we planned on mounting inside the planes when they went flying, and we had to make sure they were set up correctly and that the batteries were charged. The rest of the rental equipment had gone straight to the museum.

At 9am the next morning, we met up with Jason Somes and, to my great joy, a local sound recordist I knew that I had invited to join us, along with his assistant. It had been a few years and it was great to see him again. So after a quick hello we went straight to work. We explained to Jason in more detail what we needed to do, and Jason explained to us what we had to work around on their end. There is always airport security, safety regulations on how close we can stand to the runway, insurances and such things. It turned out to be a bit tricky to get them to co-operate from the beginning, but thanks to a great effort from Jason, and after signing some papers, all was sorted and we were escorted by two authorised personnel to the runway when it was time for the fly bys.

But before we recorded the fly, bys we rigged the aircraft for a ground run. Four microphones and a recorder were mounted inside the aircraft so that we could leave those in for the flying part as well. And around the plane we had another 20 channels set up from different angles. Once the Bearcat was done, we did the same thing with the Spitfire.

Now it was time for the flying part. Since we had recorded a Hellcat and a Mustang P-51 for Pavel a few years ago, but only on the ground, we had asked Jason to fly the Hellcat and the Mustang for us as well, so as to have some flying audio for those aircraft as well. So we mounted recorders inside these planes, and then took our gear out onto the runway. One recordist was left at the hangar to record the taxing away and back. A number of microphones were positioned along the stretch, and we were all set.

First in was the Mustang, and let me tell you, it made an incredible aound! After that we got some really low and fast passes by the Spitfire. Then they flew the Bearcat, and finally, the Hellcat. By now the sun was setting, and it was time to call it a day, after a very long and successful set of recording sessions. Though, one thing was left before we could hit the pillow, data back ups! 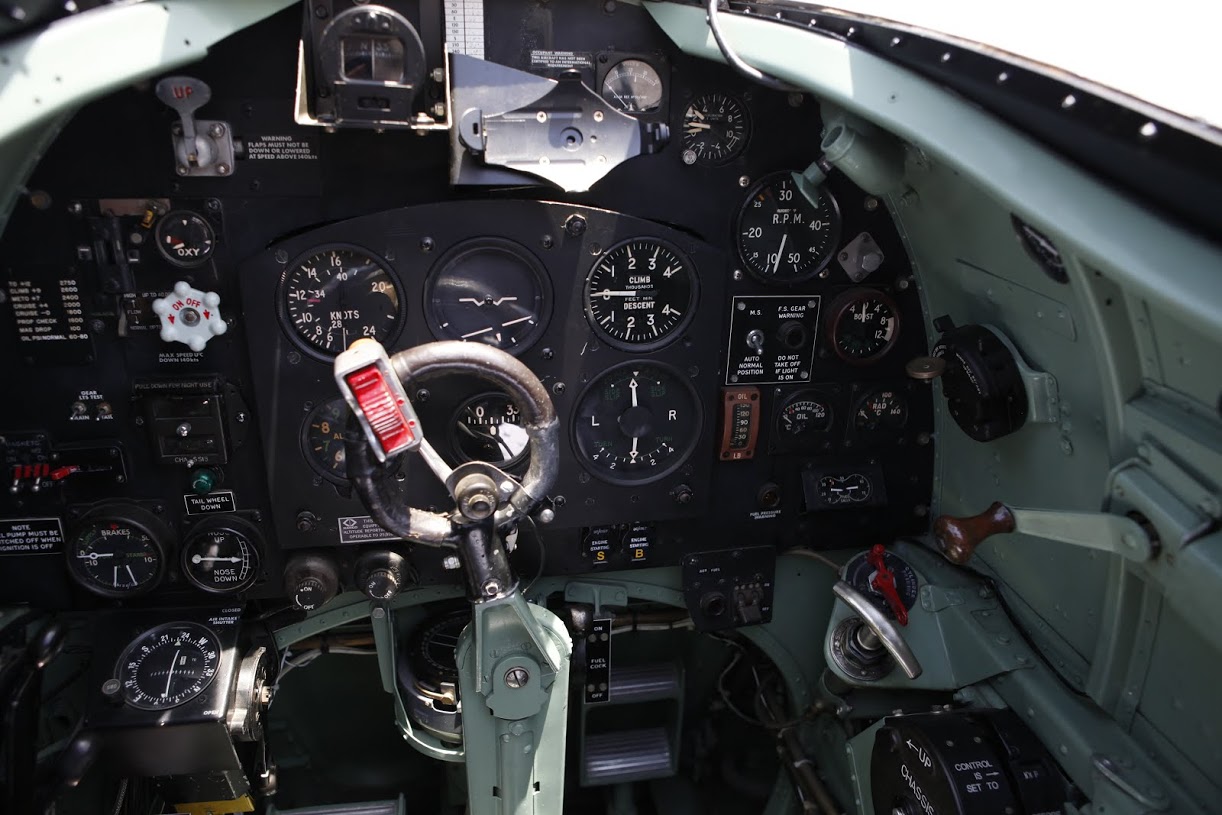 We met at 9am once again the next morning, and we had been told that the airport would be more busy and more heavily populated than the previous day, which surely turned out to be the case. There were plenty of people visiting the museum, people getting on flights with a B-25 and with the Mustang, and even people waiting to arrange a party inside the C-46! But, they would have to wait, as the C-46 was ‘our’ goal of the day. It took some time before they got the aircraft in position for us. Due to the heavy prop wash, the plane had to pint with the rear end out towards the taxi way, to avoid blowing other planes around the hangar away. So every time a plane had to taxi by, they had to take the C-46 down to idle before letting it pass. Anyway, we rigged the C-46 with eight microphones inside the cockpit and body, and then setup the usual microphones around the plane, and then we let them go through the same procedure as with the smaller aircraft the day before. What a sound! It had two engines similar to those found in the Hellcat. It was a really raw and throaty sound that could be felt in your chest and stomach! It’s actually with quite a lot of respect that you approach the propellers of this aircraft with your microphone.

Once we were done and the engines had been shut down, we did the usual packing and backing up, said thanks and bye to everyone, and then took the beautiful Highway 1 down to Sunset Boulevard. Another adventure had come to an end, and I couldn’t wait to experience the next one!